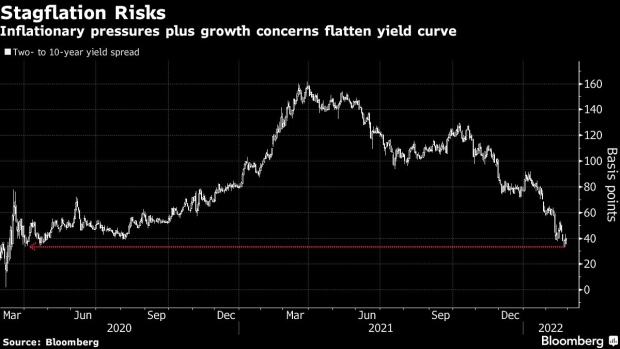 (Bloomberg) -- The world’s biggest bond market is signaling concern that Russia’s invasion of Ukraine could lead to an economic outcome the Federal Reserve is eager to avoid: persistent inflation and weak economic growth.

Bond-market gauges of short-term inflation expectations jumped to a record during the past week as oil and natural gas surged in the unfolding crisis. At the same time, the gap between short- and long-term yields narrowed, indicating expectations of an economic slowdown.

Investors scooped up Treasuries that provide protection against inflation even as traders priced in that the Fed will cut rates in 2024 following the series of hikes expected to begin next month. Bank of America Corp. strategists advised clients to start positioning for stagflation, a mix of rising prices and stagnant growth that the U.S. hasn’t seen in a generation.

“This Russia-Ukraine crisis has accelerated the stagflation trend,” said Tracy Chen, a portfolio manager at Brandywine Global Investment Management. “Higher commodity prices will cause growth to slow down and boost inflation. The Fed will be even further behind the curve.”

The Treasury market briefly served as a refuge for investors after the Russian invasion set stock prices sliding worldwide. But equities rebounded, and yields followed suit as anticipation of rising interest rates moved back to the foreground. The benchmark 10-year yield ended the week just below 2%, near the highs hit earlier this month. Yet two-year yields jumped even more, narrowing the gap between the two to just under 40 basis points from 45.5 basis points a week earlier.

The coming week will be pivotal for investors seeking to gauge the outcome of the Fed’s mid-March meeting, when it’s widely expected to start raising its policy rate from near zero, where it’s been since early in the pandemic.

Fed Chair Jerome Powell will testify before Congress on Wednesday and Thursday, providing insight before policy makers enter their pre-meeting communications blackout period. On Friday, the Labor Department will release its monthly jobs report, which is expected to show wage pressures accelerated even as payroll growth slowed amid a tight labor market.

While the Ukraine crisis led traders to mark down the odds of a half-percentage-point hike in March, they continue to anticipate a steep but short tightening cycle.

The implied yields on eurodollar futures maturing in 2024 are about 17 basis points lower than those for the 2023 contract, suggesting that traders are pricing in a high probability of a rate cut within three years.

“The takeaway is that inflation will stay elevated, and the expected Fed tightening is going to be the catalyst for slower growth,” said Kathy Jones, chief fixed-income strategist at Charles Schwab & Co. “I won’t call it stagflation. Growth isn’t stagnant but is going to slow down, coupled with that inflation impulse is going to persist for a little longer.”

The escalation of the conflict sparked a major reversal this week of fortunes for Treasury inflation-protected securities -- known as TIPS --- as fears over more price pressures mounted. These securities compensate investors for the hit of inflation and therefore yield less than their plain-vanilla Treasury counterparts.

The demand for TIPS had faltered in January and early February as Fed officials began to adopt a more hawkish tone. Yet it rebounded after the invasion, with the inrush driving the the yield on five-year TIPS down by as much as 39 basis points on Thursday, touching negative 1.61%. The yield rebounded to finish the week at around negative 1.2%.

Michael Hartnett, chief investment strategist at Bank of America, said the war in Ukraine increases the risk of stagflation and missteps by the Fed.

“Portfolios should position for stagflation and dollar debasement,” he wrote in a note with his colleagues. The “1970s show this bullish real assets, commodities, TIPS, small cap value, and EM.”