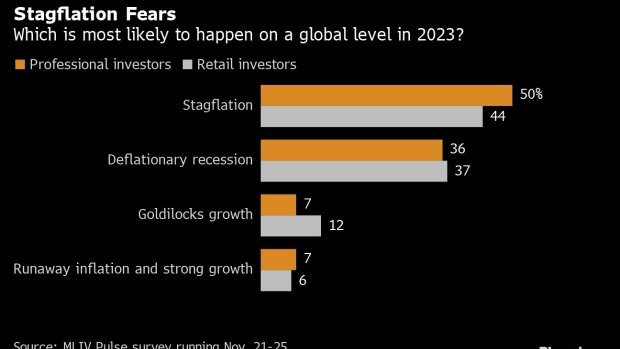 (Bloomberg) -- Stagflation is the key risk for the global economy in 2023, according to investors who said hopes of a rally in markets are premature following this year’s brutal selloff.

Almost half of the 388 respondents to the latest MLIV Pulse survey said a scenario where growth continues to slow while inflation remains elevated will dominate globally next year. The second most likely outcome is deflationary recession, while an economic recovery with high inflation is seen as least probable.

The results signal another challenging year for risk assets after central bank tightening, surging inflation and impact of Russia’s invasion of Ukraine have fueled the worst equity rout since the global financial crisis. Against this grim backdrop and as stocks have rallied in the fourth quarter, over 60% of survey participants said investors around the world are still too bullish on asset prices.

“Next year is still going to be difficult,” said Nicole Kornitzer, the Paris-based portfolio manager of the Buffalo International Fund at Kornitzer Capital Management Inc., which oversees about $6 billion. “Definitely, stagflation is the outlook for now.”

Meanwhile, about 60% of participants expect the dollar to weaken further a month from now. That contrasts with last month, when almost half of the respondents said they would go into the November Federal Reserve meeting with a long position in the dollar. The strength of the greenback has weighed on several asset classes this year, including other currencies like the euro and emerging-market equities. A sliding dollar could create pockets of opportunities in what’s already expected to be a lackluster 2023.

“The dollar will probably weaken throughout 2023,” Kornitzer said. “Maybe not dramatically, but the trend will probably be downward.” A recession in the US and the direction of rates will be the key catalysts for the currency, she said.

All eyes are on the Fed moving into 2023 with growth likely to be hampered further as rates remain higher for longer, a regime which has already been foreshadowed by Chair Jerome Powell. At the same time, China’s strict Covid Zero policy is another risk for the global economy as cases hover at record highs amid growing protests against the nation’s Covid curbs. The escalating unrest in China has pushed oil and US equity futures down. Bloomberg dollar spot index also fell.

More than half the respondents expect the S&P 500 to finish 2023 within a range of 10% lower or higher. That’s in line with Wall Street’s expectations, with strategists at Goldman Sachs Group Inc., Morgan Stanley and Bank of America Corp. among those who see the S&P 500 relatively unchanged about 12 months from now. They all expect deteriorating earnings to weigh on share performance.

“Analysts will need to downwardly adjust their earnings estimates,” said Anneka Treon, an Amsterdam-based managing director at Van Lanschot Kempen, whose firm has a conservative view on stocks over 2023. “We expect Europe to see an economic contraction, the US will likely only be able to show modest growth, and China will no longer achieve its own ambitions.”

Yet for all the pessimism, survey respondents said US inflation is more likely to fall below 3% in 2023 than it is to surpass 10%, implying some relief toward the end of the year. That would be welcome news for Fed officials, who already signaled they were leaning toward downshifting to a 50 basis-point hike in December to mitigate risks of overtightening.

In terms of opportunities, MLIV survey participants see a chance to snap up long-duration bonds and tech stocks, among other themes. Both asset classes have been hammered this year due to the sharp rise in interest rates.

Among other potential risks in 2023 are housing market developments in the UK and Canada, with respondents seeing a higher likelihood of a 20% crash in those countries than in others. The jump in borrowing costs is forcing some potential buyers out of the market and spurring predictions of a decline in house prices.

Most respondents discounted the possibility of escalating geopolitical conflicts next year -- for example, China and Taiwan as well as NATO and Russia.

“The first half of 2023 will be dominated by the higher rates story,” said Ipek Ozkardeskaya, a senior analyst at Swissquote. “However, around the third and fourth quarters of next year, we expect the market rhetoric to shift toward ‘low growth and recession’.”

--With assistance from Tomoko Yamazaki.

(Adds US, oil trading in the seventh paragraph.)