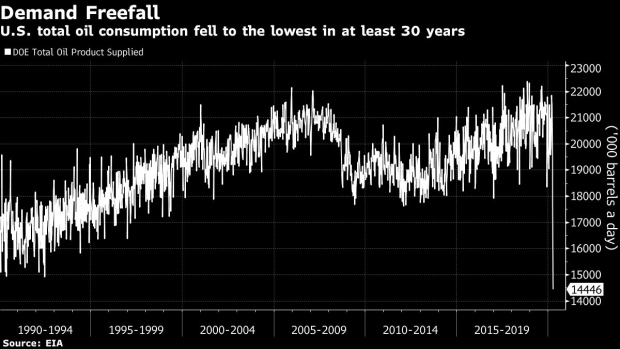 (Bloomberg) -- Global oil demand is plummeting faster than anyone predicted -- with U.S. drivers consuming less gasoline last week than any time in 50 years -- heightening pressure on the world’s biggest producers to cut supply.

Yet, with less than 24 hours before an emergency meeting of the OPEC+ alliance on Thursday, Russia and Saudi Arabia still haven’t reached a final deal to cut production, with many details still up in the air, according to people familiar with the negotiations.

As the group faces pressure from U.S. President Donald Trump to clinch a 10% cut in global oil supply and resuscitate a market fresh off its worst quarter in history, many fear the cut may not be enough to offset unparalleled demand losses. The stakes could not be higher: What happens Thursday could bend the fortunes of energy players across the globe, from Big Oil and U.S. shale companies, to petro-states such as Nigeria and Kazakhstan.

Bringing supply and demand into balance amid an extraordinary freefall in global consumption is a formidable task. While China is expected to ramp up oil processing in April, providing a glimmer of hope to the market, the move likely won’t negate historic declines in the U.S., India and elsewhere.

U.S. demand now has fallen to 14.4 million barrels a day, the lowest level in data going back to 1990 and down more than 30% from pre-crisis levels, government figures showed Wednesday. In India, the world’s third biggest oil consumer, official data showed demand plunged nearly 18% in March, despite the fact the country went into lock-down only on March 25. And refiners privately said demand was down as much as 70% in early April.

The staggering losses, coupled with anecdotal declines of up to 70% in Europe, mean the world may be consuming even less oil than previously thought, traders said. In normal times, the world uses about 100 million barrels a day, but some traders believe it’s consuming just 65 million, or even less.

“The demand shortfall, which is much larger than the most optimistic amount of cuts by OPEC++, will eventually push prices lower,” said Bjornar Tonhaugen, head of oil market at consultant Rystad Energy.

The diplomatic wrangling between the world’s top oil producers intensified on Wednesday after Moscow cast doubt on the U.S.’s contribution to a global deal to reduce oil production. While Saudi Arabia, Russia and their OPEC allies are discussing deliberate production cuts to offset the impact of the coronavirus pandemic, so far the U.S. is only offering an output decline driven by market forces.

The Kremlin said on Wednesday that Russia does not consider a supply reduction based on falling demand or lower prices to be a real output cut. It was the first statement from Moscow about this crucial aspect of the talks and indicated that President Vladimir Putin may be expecting a more significant contribution from the U.S. than his counterpart Donald Trump is willing to give.

“You are comparing the overall demand drop with cuts aimed at stabilizing the global market,” Kremlin spokesman Dmitry Peskov told reporters at his daily conference call, when asked if Russia would accept U.S. production cuts driven only by market forces. “These are completely different things.”

Washington has so far offered what officials described as “automatic” cuts, which are expected to happen as companies from Exxon Mobil Corp. to independent shale explorers slash spending in response to low prices. This process could remove a sizable amount of oil from the market, but it would happen only gradually and only if prices stay low.

Beyond the role of the U.S., Russia and Saudi Arabia haven’t yet agreed on how to distribute output curbs among each OPEC+ country, the same people said, asking not to be named discussing diplomatic negotiations. Neither have they agreed on the baseline for the reductions.

“It’s resolvable -- the overwhelming likelihood is it gets resolved by tomorrow,” said Ed Morse, head of commodities research at Citigroup Inc. “It’s a negotiation: somebody has to change their position, or there’s got to be a meeting in the middle. I don’t see the gain for anyone of not having an agreement.”

Brent crude was little changed on Wednesday, trading at around $32 a barrel. The global oil benchmark fell in late March to a 18-year low of $21.65 a barrel.

With Trump pressing hard for a deal, and the whole Group of 20 involved too, a lot is riding on this week’s negotiations. OPEC+ will convene a video conference at 4 p.m. Vienna time on Thursday, by video link. Saudi Arabia will lead a virtual conference of G-20 energy ministers the following day at 3 p.m. Riyadh time.

As demand for gasoline, diesel and jet-fuel plunges, refiners around the world are cutting the amount of crude they process, in turn reducing their purchases. On Wednesday, more refiners cut rates by around 30%, including HollyFrontier Corp. and Marathon Petroleum Corp. Lower crude demand means barrels are diverted into tanks and oil tankers transformed into floating storage facilities.

The most shocking drop in U.S. consumption was concentrated on gasoline, long the fuel that powered the American way of life. The Energy Information Administration said a proxy for gasoline demand fell to 5.06 million barrels a day, the lowest since weekly data is available starting in 1990. Separate monthly data suggests the U.S. may have not consumed so little gasoline anytime since 1969, the year of the moon landings.

If Russia, OPEC and the G-20 can make a deal, it could result in a historic reduction of about 10% of global supply, or about 10 million barrels a day, dwarfing any previous market interventions. That’s something that the physical market for crude -- trade in actual cargoes rather than futures contracts -- needs immediately.

Yet, traders and consultants are worried any deal between OPEC+ and the G-20 would end in a fudge, removing far less crude from the market than the headline cut of 10 million barrels a day suggests. In a note to clients that echoed the view of many in the market, Amrita Sen, chief oil analyst at consultant Energy Aspects Ltd., asked whether the talks would culminate in “fake deal.”