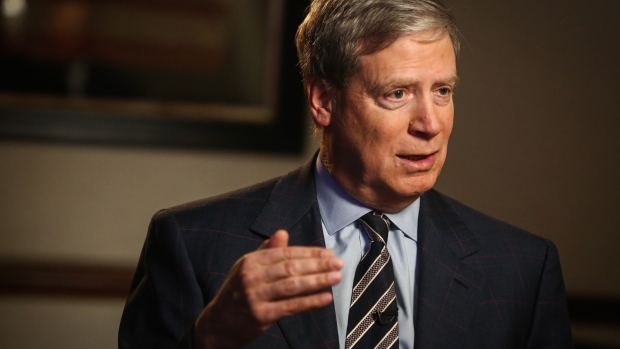 (Bloomberg) -- Billionaire Stan Druckenmiller is glad he’s no longer in the hedge fund business now that algorithmic and quantitative trading have taken over markets.

“I made 30 percent a year for 30 years. Now, we aren’t even in the same zip code, much less the same state,” he quipped of his recent returns in an interview with Bloomberg Television.

Druckenmiller, 65, explained that his investment process has always involved divining so-called market signals. But quantitative funds, which now account for $1 trillion in assets, have muted or even silenced those cues, making it a lot less clear what’s behind price moves.

“I think the message over eight or nine months is still great," said Druckenmiller, who converted his hedge fund to a family office after closing Duquesne Capital Management in 2010. "I just think over a week or two, you’re getting noise that used to mean something, and now it doesn’t mean anything."

The return of volatility was long heralded as key to a rebound in hedge fund performance. Yet the recent wild swings in stocks aren’t helping Druckenmiller because they haven’t been accompanied by any discernible trends. And after four decades in the financial markets, he said he’s never seen an environment in which changes of direction have been so extreme.

"Volatility is only good if it’s part of the trend and it’s giving you entry points within a trend," he said. "When you’re going up and down, but there’s no real trend, that’s a nightmare. You might think that a volatility move is the beginning of a trend and get yourself whipsawed."

Even without those headwinds, Druckenmiller was already bearish on the prospects for his former industry. He recalled that in 1981, when he started Duquesne, there were only a handful of hedge funds and clients expected returns of 20 percent a year, no matter how challenging the environment.

The lack of competition made it easier to find profitable trades. But as demand for hedge funds grew and more smart investors entered the field, returns got harder to generate. This year, HFR’s Global Hedge Fund Index is down more than 6 percent, and has underperformed the S&P 500 Index every year since the financial crisis.

"I’m not surprised at all by the hedge funds not doing well," Druckenmiller said. In the future, "there’s probably going to be 10 to 20 of them that are great," and the rest shouldn’t be charging traditionally high fees.

For those intrepid traders who still want to try their hand at managing hedge fund money, Druckenmiller ticked off three requisite qualities: Be intellectually curious, open-minded and have the courage to bet big and fight your emotions.

"I’ve never made a buy at a low that I didn’t just feel terrible and scared to death making it," he said.

And for all his complaints about algorithms, one thing Druckenmiller says traders don’t need to know is coding; but “you better know what they’re doing because they influence the markets.”

To contact the editors responsible for this story: Margaret Collins at mcollins45@bloomberg.net, Alan Mirabella