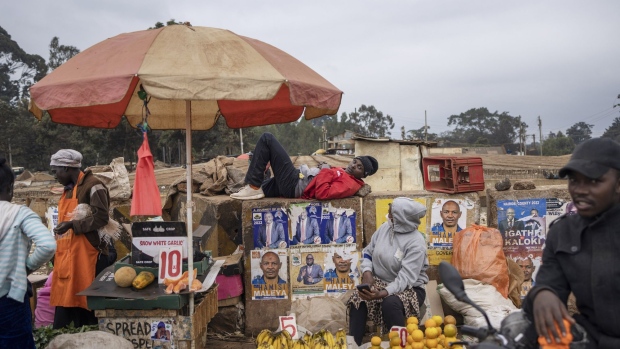 A vendor rests on a wall at a street market in the Kangemi district of Nairobi, Kenya, on Monday, Aug. 1, 2022. Kenyans will head to the polls on Aug. 9 to choose a new president in a contest pitting fifth-time contender Raila Odinga against William Ruto, a challenger who’s anchored his campaign on a rags-to-riches story. Photographer: Michele Spatari/Bloomberg , Bloomberg

(Bloomberg) -- Kenya may return to the international market to refinance $2 billion of eurobonds maturing in June 2024, aided by easing interest rates in the US, according to Standard Chartered Bank Kenya Ltd.

“Market conditions would have improved” if the Fed starts cutting interest rates, Eva Wanjiku-Otieno, Africa strategist at the local unit of Standard Chartered Plc, said in an interview. That would increase “the probability of Kenya being able to refinance its upcoming maturity,” instead of tapping its foreign-exchange reserves, she said.

Several measures of US inflation have shown encouraging signs in recent weeks, including declines in the consumer price index, which fell to 6.5% in the year through December, off its high of 9% in June. In response, Treasuries have surged, with investors betting the Federal Reserve will stop raising rates and begin reducing borrowing costs sooner than policymakers are currently projecting.

Lower US borrowing costs will help frontier markets such as Kenya resume selling overseas bonds after being locked out of capital markets for more than a year. President William Ruto’s move to reduce subsidies and control debt may also help lure investors.

Ruto has pledged to boost the economy and create new jobs, while easing the nation’s debt burden. Kenya, which the International Monetary Fund has categorized as being at a high risk of debt distress, had public liabilities of 8.9 trillion shillings ($72 billion) as of November, according to central bank data.