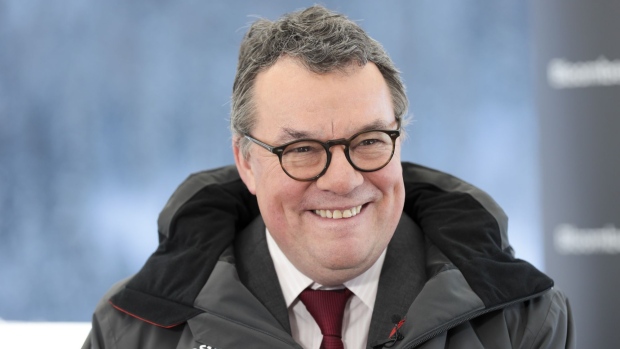 (Bloomberg Opinion) -- As Keith Skeoch prepares to step down as chief executive officer of Standard Life Aberdeen Plc, the report card on his tenure reads: “A for Effort, B for Achievement.”

By the time he leaves in the third quarter, it will have been three years since he and former Aberdeen Asset Management CEO Martin Gilbert engineered the merger of their respective firms in August 2017. The deal was designed to create an asset manager that could compete in what Gilbert dubbed “the $1 trillion club.” The reality has turned out to be somewhat different.

Size has proven to offer scant defense against the trends buffeting the fund management industry, including money flowing away from active managers and into low-cost, index-tracking products, increased regulatory scrutiny and relentless downward pressure on what firms can charge for managing other people’s money.

It’s impossible to test the counterfactual Skeoch has stressed: that Standard Life and Aberdeen would have fared even worse as standalone firms. But for shareholders, the union has been less than blessed.

Douglas Flint, who took over as chairman in January 2019, has been a catalyst for change. Two months after his arrival, the company abandoned the dual CEO structure it had operated since the merger, with Skeoch taking sole control. Gilbert said he wanted to avoid having Flint “tap me on the shoulder and say ‘come on, it’s time to go.’”

Flint’s previous role as chairman of HSBC Holdings Plc was probably instrumental in the choice of Skeoch’s successor, Stephen Bird, who ruled himself out as a potential candidate for the top job at HSBC earlier this year. Bird’s career experience during 21 years at Citigroup Inc., most recently as head of its global consumer banking unit, after acting as the bank’s top executive in Asia, gives a strong hint as to where Standard Life Aberdeen expects its future growth to come from.

Geographically, Asia is at the top of every fund manager’s list of potential customer growth; Bird’s contact book should help open doors in the region. And Standard Life Aberdeen’s wealth management division, which “has not lived up to potential,” according to a Tuesday research note from Hubert Lam at Bank of America Corp., will be in renewed focus.

I wrote in December that Flint might be tempted to tap Skeoch on the shoulder if the firm’s performance didn’t improve. Still, his departure is a surprise, and it’s a shame he couldn’t go out on a higher note by delivering a boost to assets under management and a share price worth more than half its value since the merger. Whether his successor’s lack of asset management experience will prove a blessing or a curse remains to be seen.