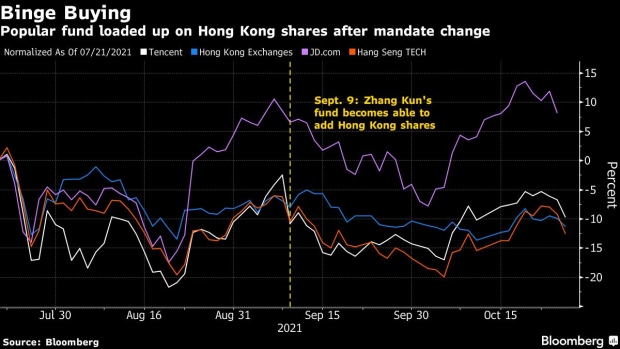 (Bloomberg) -- A Chinese celebrity fund manager has gone on a shopping spree for Hong Kong’s battered shares, switching out a large chunk of mainland stocks after gaining investor approval last month to invest in the region.

Zhang Kun’s E Fund Quality Selected Mixed Fund now has 23% of its shares in the city after a change of mandate finalized on Sept. 9. The 21.7 billion yuan ($3.4 billion) fund has snapped up the likes of Tencent Holdings Ltd., Hong Kong Exchanges & Clearing Ltd. and JD.com Inc., counting them among its largest holdings at the end of September, according to a filing Wednesday.

The reshuffling has started to pay off, with the fund gaining 7.8% in the past month to beat 96% of peers, according to figures complied by Bloomberg.

Chinese traders closely watch the moves of star manager Zhang Kun, who was the first in the country to oversee 100 billion yuan in mutual fund products, with his purchases of local liquor stocks during the rally earlier this year drawing copycats.

But he remains under pressure to live up to his reputation, with the fund still 8% in the red this year, putting him in the bottom sixth percentile.

“We believe the recent declines have made valuations of quality firms reasonable,” the filing said. “There was no froth at the time we started adding them, even if it’s hard to tell if they will become temporarily undervalued again, like in late 2018.”

The fund had 9.4% of its assets in Tencent at the end of last month, near the 10% cap for an individual stock. It also had 5% each in Hong Kong Exchanges and JD.com. It has added stocks in the consumer staples, internet and banking sector, while lowering exposure to healthcare and appliances, the filing said.