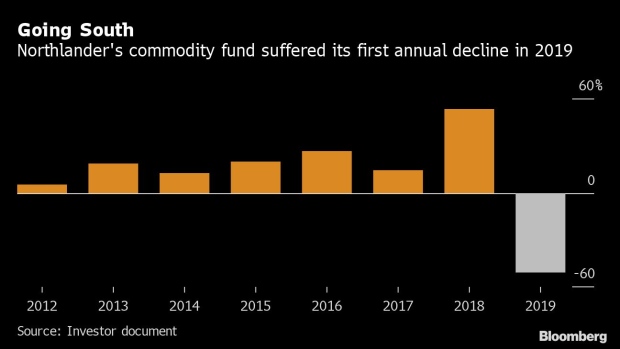 Northlander Commodity Advisors LLP suffered a 50.6% plunge last year, a spectacular reversal from its 2018 position as a darling of the hedge fund industry.

Assets under management at the fund run by Ulf Ek shrank to $310 million after it posted its first annual loss since inception in 2012, according to people familiar with the matter. The fund had gained prominence on the strength of its bets on natural gas, power and emissions. It finished 2018 with almost $500 million in assets.

Northlander, which is based on the leafy London suburb of Richmond, rose to star status with double-digit gains every year from 2013 to 2018, including a 53.6% return in 2018. Despite the large loss last year, the fund has returned 83.6% since inception eight years ago.

In an update memo to investors seen by Bloomberg News, Ek said the firm had a “miserable end to a miserable 2019.” The hedge fund has significantly reduced its exposure to the emissions market, where it made a large chunk of its money in 2018, he said.

“We have restructured the portfolio significantly” in emissions, he wrote in the note, saying the exposure was now lower “than it has been over the last two years.”

The price of emissions allowances in Europe has largely flat-lined after a big rally from 2016 until early last year. Ek told investors that he believes that carbon will climb in 2020. He also told them he was bullish on coal prices.