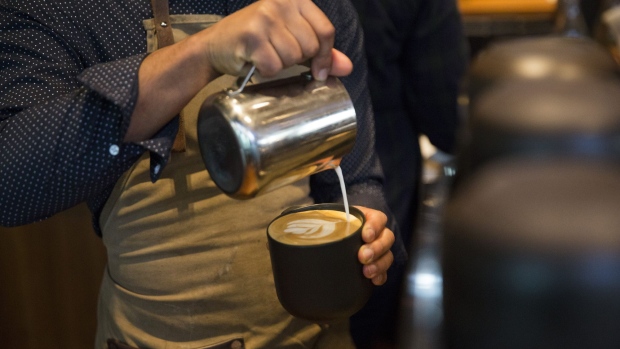 A barista pours milk in a coffee order at the Starbucks Reserve Roastery and Tasting Room in Seattle, Washington, U.S. , Mike Kane/Bloomberg

Starbucks Corp., the world’s biggest coffee-shop chain, is looking into meat alternatives to rev up its breakfast menu, and that caught the attention of Beyond Meat Inc. investors.

Seattle-based Starbucks said in an email to Bloomberg News that it’s “exploring meat alternatives” for its breakfast menu, but declined to comment on specific partnerships or brands. Major restaurants have raced to include faux meat as consumers warm to plant-based products that have the look and feel of meat.

Beyond Meat shares jumped as much as 14 per cent to US$124.82 on Tuesday. Rupesh Parikh, an analyst at Oppenheimer, said the Starbucks announcement illustrates how the market for faux-meat products continues to grow.

“It shows how the trend continues to go mainstream,” Parikh said in an email. “Beyond likely has a chance at selling products at Starbucks.”

Beyond Meat has already partnered with McDonald’s Corp. for testing in Canada. The company’s imitation beef and sausage products are becoming increasingly widespread in North American restaurants.

Starbucks, meanwhile, has been adding dairy alternatives to its beverage menu, with the recent addition of oat milk at about 1,300 of its 14,000 U.S. locations. The company has also tried to add more healthy options to its menu in recent years in addition to high-calorie breakfast pastries. That’s included cauliflower-tabbouleh salads and almond-butter sandwiches.

Starbucks also announced Tuesday that it’s trying to reduce its carbon footprint by curbing emissions, water usage and waste. The company’s shares fell less than one per cent in New York trading on Tuesday.