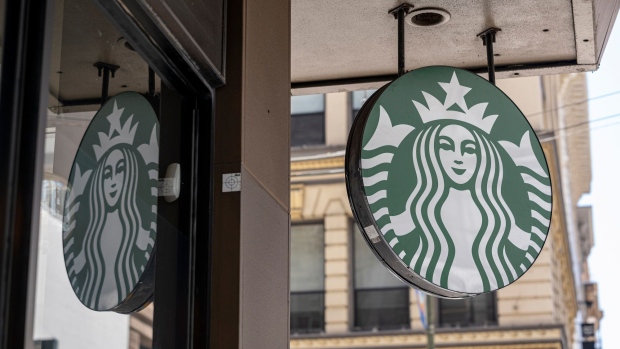 Signage outside a Starbucks coffee shop in San Francisco, California, U.S., on Thursday, April 28, 2022. Starbucks Corp. is expected to release earnings figures on May 3. , Bloomberg

(Bloomberg) -- A Starbucks Corp. barista says he was fired for wearing a mental-health awareness pin -- a move the company’s union claims is part of a purge of labor activists.

The fired barista, Will Westlake, is also a prominent union organizer at one of the first three cafes around Buffalo, New York, that petitioned to form a union last year.

Westlake said he and others at his store began wearing the pins after a co-worker died by suicide earlier this year. After management told them the pins violated the dress code, most removed them to avoid getting in trouble, he said.

Westlake continued wearing his, and he said management sent him home dozens of times and issued him a “final written warning” for refusing to remove it. In a termination notice issued Tuesday, Starbucks said it fired Westlake due to “refusal to abide by the dress-code policy,” as well as attendance issues.

The union, Starbucks Workers United, has accused the company of illegally firing more than 80 employees because of their role in labor organizing, a protected act. It filed a new labor board claim on Tuesday about Westlake’s termination and asked the agency to seek a federal court injunction in his case.

A Starbucks spokesperson said Tuesday that operations at Westlake’s store were disrupted when he was repeatedly sent home for refusing to remove his pin. The spokesperson said Starbucks does not retaliate against employees for lawful union activity.

The company has repeatedly said it follows US labor laws in its dealings with the union and employees. In a post on its website from Aug. 31, the coffee chain said that “all partners have the right to make their voice heard when it comes to union issues.” This includes  “protected activities” such as “wearing a button or pin expressing support for a union or fellow partners,” according to the post.

Westlake’s pin doesn’t reference a union. Instead, it shows interlocked fingers and says “You are not alone,” along with the website of the American Foundation for Suicide Prevention.

In an interview last month, Westlake said he wears the button to honor his deceased co-worker -- and also to protest the company’s selective enforcement of its dress code and refusal to let employees freely wear the pin. He also was looking to call attention to management actions that he says are harmful to workers’ mental health.

“There are a lot of partners who are dealing with mental-health crises,” Westlake said, using Starbucks’ term for employees. “We did lose someone at my store to this issue, and the fact that somehow it’s going to be suppressed I don’t think is helpful to anyone’s mental health in our store.”

After Starbucks issued Westlake a final warning last month for not adhering to its dress code, the union filed a claim with the US National Labor Relations Board alleging that the company was retaliating against him for his union activism.

The labor board’s general counsel Jennifer Abruzzo has issued dozens of now-pending complaints against the company, including one in August which alleged that Starbucks retaliated against employees including Westlake by “selectively and disparately” applying its dress code.

The NLRB is tasked with enforcing federal labor law, which prohibits retaliating against employees for taking collective action related to their working conditions. It can order companies to reinstate wrongly fired employees with backpay and to change illegal policies, but lacks the authority to make them pay punitive damages for violating the law.

Former labor board officials say the agency could potentially go after the company for selective enforcement of its dress code and also deem the suicide-awareness button as a legally protected form of activism about working conditions.

“An argument could be made that this button is symbolic of solidarity with folks that are burdened with these kinds of psychological pressures as a result of a hostile work environment that the union is trying to fight against,” said former union attorney Mark Pearce, who chaired the NLRB under the administration of President Barack Obama, in an interview last month.

Abruzzo, the NLRB’s general counsel, has taken a broad view of what counts as legally protected workplace activism. She has issued complaints against Home Depot, Kroger and Whole Foods Market for restricting workers from wearing Black Lives Matter apparel, arguing that the slogan was sufficiently related to workplace conditions to be legally protected.

While the union narrowly lost the election late last year at Westlake’s store, Abruzzo is seeking an order that would annul that result and force Starbucks to recognize the group. She’s arguing the union demonstrated majority support and that the company violated the law egregiously enough to make a fair election impossible. Westlake has been a prominent face of the union campaign at his store and nationwide, discussing it with media outlets as well as helping workers organize in several states.

The union has prevailed in elections at more than 240 of Starbucks’ roughly 9,000 corporate-run US stores over the past year.