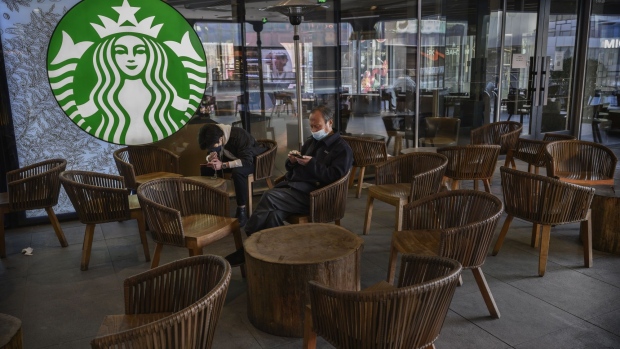 BEIJING, CHINA - MARCH 10: Chinese men wear protective masks as they sit in a nearly empty Starbucks in Sanlitun on March 10, 2020 in Beijing, China. The number of cases of the deadly new coronavirus COVID-19 being treated in China dropped to below 18,000 in mainland China Sunday, in what the World Health Organization (WHO) declared a global public health emergency last month. China continued to lock down the city of Wuhan, the epicentre of the virus, in an effort to contain the spread of the pneumonia-like disease. Officials in Beijing have put in place a mandatory 14 day quarantine for all people returning to the capital from other places in China and countries with a large number of cases like South Korea and Japan. The number of those who have died from the virus in China climbed to over 3140 on Tuesday, mostly in Hubei province, and cases have been reported in many other countries including the United States, Canada, Australia, Japan, South Korea, India, Iran, Italy, the United Kingdom, Germany, France and several others. The World Health Organization has warned all governments to be on alert and raised concerns over a possible pandemic. Some countries, including the United States, have put restrictions on Chinese travellers entering and advised their citizens against travel to China.(Photo by Kevin Frayer/Getty Images) , Photographer: Kevin Frayer/Getty Images AsiaPac

(Bloomberg) -- Coffee giant Starbucks Corp. has ordered a full inspection of every branch in China after undercover reporters discovered staff in two of its outlets using expired ingredients.

The coffee chain vowed a zero-tolerance policy on food safety after the state-backed Beijing News reported that two outlets in the city of Wuxi violated standards. In footage released Monday, staff were seen removing an expiration date sticker from a bottle of chocolate sauce and replacing it with a new one printed with a later date. In another store, out-of-date pastries and cacao nibs were found for sale.

“We deeply apologize and will actively improve the practices. We’ll closely cooperate with the investigation and request continuous monitoring from the public and media,” Starbucks China said on its Weibo account Monday night.

The company acknowledged that employees had violated the country’s operating regulations and vowed to launch a full inspection of food safety standards across all 5,400 outlets in mainland China.

The topic quickly went viral on Weibo, racking up 270 million views as of Tuesday morning, sparking anger among many customers. “Please provide coffee with the quality worth the 30-40 yuan ($4.70-$6.30) price tag,” one comment read.

Foreign brands often come in for criticism and boycott efforts in China, where consumer nationalism is on the rise encouraged by President Xi Jinping’s government. Earlier this month, Canada Goose Holdings Inc. saw its stock drop 14% over three days after being criticized by state media for giving a refund to a disgruntled customer. In a more serious instance, Swedish fashion chain H&M’s revenue there plunged after being blocked on e-commerce platforms over its stance of not using cotton sourced from Xinjiang, the western province where China is accused of human rights violations.

China is one of the most important markets for growth at Seattle-based Starbucks, along with the U.S. Sales at the coffee chain’s Chinese locations have been volatile amid Covid-19 resurgences and on-and-off restrictions. Still, Chief Executive Officer Kevin Johnson has said the company’s long-term commitment and confidence for growth in China is unwavering.