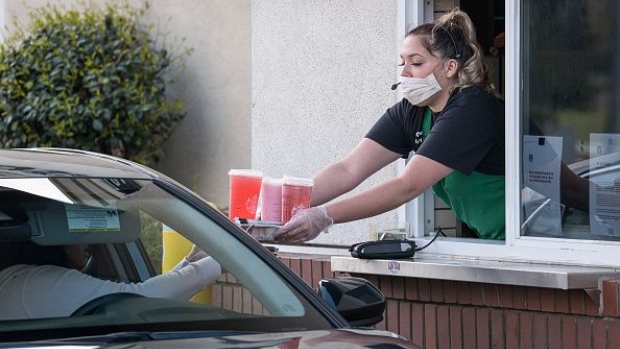 A Starbucks Corp. employee wearing a protective mask and gloves hands a customer an order from a drive-thru window at a store in Hercules, California, U.S., on Tuesday, April 7, 2020. , Photographer: Bloomberg/Bloomberg

The coffee giant reported global same-store sales that were down 9 per cent in the fourth quarter, better than the 11.9 per cent drop analysts surveyed by Consensus Metrix were expecting. Although that marks the third straight quarter of overall declines, the size of the drops have abated since the spring, when much of the world was on lockdown. In the U.S., comparable sales fell 9 per cent, beating expectations.

Looking forward, Starbucks says it gets better from here: The chain forecasts global comparable sales will grow between 18 per cent and 23 per centduring the first quarter and 2021, with expected growth as high as 32 per cent in China. The recovery at home will be a little slower, with comparable sales in the Americas rising between 17 per cent and 22 per cent in the first quarter and next year.

“Our strategies are working and I am optimistic that we will emerge from the Covid-19 pandemic as a stronger and more resilient company,” Chief Executive Officer Kevin Johnson said in an email.

Starbucks, like its rivals, has been trying to adapt to a new normal where delivery and drive-thru are king and few pandemic-wary diners want to linger inside stores. The company, which was already testing pick-up only stores before the virus hit, has accelerated the roll out of to-go locations that boast smaller footprints and less seating.

To make room for the new stores, which will be in cities like New York, Boston and Chicago, Starbucks has said it will be closing about 400 of its traditional cafes in urban areas. In the latest quarter, Starbucks opened 480 net new stores, ending the year with 32,660 locations globally, nearly half of which are in the U.S.

Like other quick-service restaurants, Starbucks has said that consumers are buying more per order but visiting much less frequently during the pandemic. That’s still this case this quarter: In the U.S. and Americas region, the number of transactions were down 25 per cent but the average check per visit was up 21 per cent. The trend was similar on a global basis.

Same-store sales in China were down 3 per cent in the latest period; analysts had forecast a 2.7 per cent drop.

Revenue of US$6.2 billion was down 8 per cent from the same period last year but ahead of analyst projections. The company said it lost about US$1.2 billion in sales relative to its expectations ahead of the pandemic.