U.S. housing starts rose slightly in May and applications to build dropped to a seven-month low, suggesting the pace of residential construction may be moderating after a recent run-up in building-materials costs.

Residential starts rose 3.6 per cent last month to a 1.57 million annualized rate, according to government data released Wednesday. April starts were revised down to 1.52 million. Applications to build slipped three per cent in May.

Builders struggled to keep up with robust demand throughout the pandemic, while elevated materials costs and a shortage of qualified workers have challenged developers seeking to ramp up construction. Limited inventory has sent prices soaring, tempering buyer interest that may allow firms to make progress on growing backlogs.

In a recent survey by the University of Michigan, a record share of consumers reported higher prices as a reason for bad home-buying conditions. 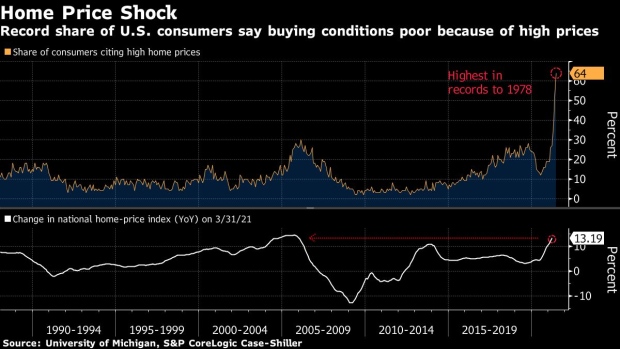 More housing inventory would help mitigate the growth in asking prices and a more recent moderation in lumber prices could spur construction. Further, low borrowing costs are also helping to offset some of the recent surge in home prices.

Officials at the Federal Reserve have shown no indication of raising interest rates in the near future, indicating mortgage rates may remain low for some time.

Applications to build, a proxy for future construction, decreased to an annualized 1.68 million units in May, the slowest pace since October. A measure of homebuilder sentiment out Tuesday eased slightly in June but remained well above pre-pandemic levels, suggesting construction starts will remain firm in the coming months.

The data suggest backlogs are continuing to build. The number of one-family homes authorized for construction but not yet started -- a measure of backlogs -- edged up to 142,000 in May, the most since October 2006.