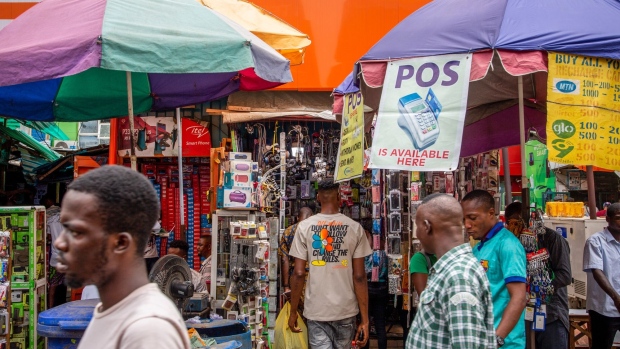 Pedestrians walk past mobile phone and tech kiosks on Otigba street in Lagos, Nigeria, on Monday, March 29, 2021. Nigerians are having to contend with the highest inflation rate in four years, the second-highest unemployment rate on a list of 82 countries tracked by Bloomberg, and an economy that’s only just emerged from recession. Photographer: Adetona Omokanye/Bloomberg , Bloomberg

(Bloomberg) -- TradeDepot, a Nigeria-based e-commerce startup, quadrupled its valuation by drawing in new money as the company looks to expand its reach among small African retailers that generate an estimated $1 trillion in annual sales.

The digital platform, which connects businesses using its network to distributors of consumer goods, raised $110 million in an equity and debt funding round, according to a statement Monday. The International Finance Corp. led the equity round, joined by investors including Novastar and CDC Group as well as existing backers Partech and MSA Capital. The debt raise was led by Arcadia Funds.

While TradeDepot wouldn’t disclose the valuation that the round places on the business, co-founder and Chief Executive Officer Onyekachi Izukanne said it’s four times the level reached previously. The firm raised $3 million March 2018 and another $10 million last July.

“We will be rapidly expanding our retail footprint, bringing more stores on board,” he said. “We’re building our platform to provide more financial services to these retail stores.”

Poor access to capital and fragmented distribution channels available to small shops in Africa have created an opening for TradeDepot to unlock financing. With over 100 suppliers and more than 100,000 stores on its platform, the company provides credit for retailers to access inventory with an option to pay back in installments as clients purchase the goods.

The new funding will help support plans to extend buy-now-pay-later services to vendors, the company said.

TradeDepot is navigating an informal economy that the IFC, the World Bank’s arm for the private sector, estimates is responsible for providing about 80% of jobs in the region. It has operations in 10 Nigerian cities and one location each in South Africa and Ghana.

The five-year startup is starting to cast its net beyond Nigeria by “doubling down” on Ghana and South Africa, Izukanne said. About 85% of the stores on TradeDepot are in Nigeria.

It anticipates the number of shops using the platform will triple over the next 18 months as it sets up new distribution centers. The company expects to become a “dominant player” in each of the three markets that are currently in focus, according to Izukanne.