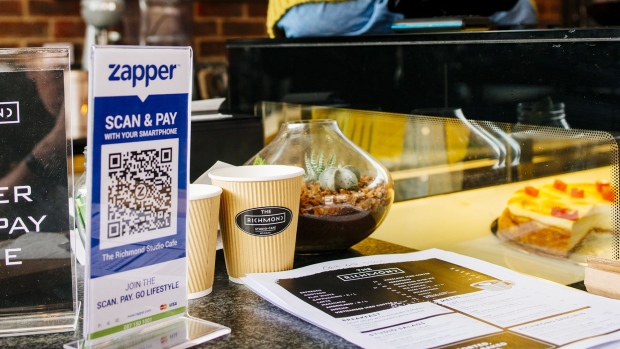 A Zapper 'Scan & Pay' QR code for mobile payment stands on the counter in a cafe in the Richmond district in Johannesburg. , Photographer: Waldo Swiegers/Bloomberg

(Bloomberg) -- Zapper is considering options to raise capital, including a stake sale, that could value the South African startup at nearly $1 billion, according to people familiar with the matter.

The Cape Town-based mobile payments business hired Ernst & Young as advisers on a potential deal, the people said, asking not to be identified because the information is still private. Zapper may also consider a combination with a strategic bidder, they said.

“Management is excited by future opportunities, underpinned by an innovative technology roadmap,” a Zapper spokesperson said in response to questions about a potential deal. Interested parties place “us in excellent standing for ongoing and future discussions,” the person said, declining to comment further.

African startups attracted a record $5 billion in fundraising rounds last year as investors backed firms trying to fix the continent’s thorniest problems, such as insufficient banking infrastructure. Fintech companies have expanded rapidly over the past few years, with several attaining “unicorn” status with valuations of more than $1 billion.

Zapper, started in 2014, operates a mobile payments platform with about 250,000 customers and 65,000 merchants. It’s solution enables quick settlements use QR code and URL technology and the use of data insights to award discounts.