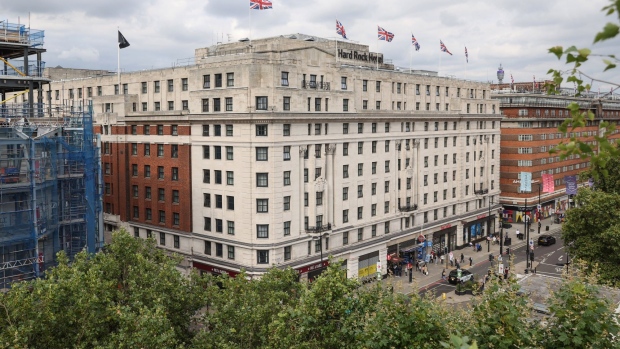 The Hard Rock Hotel viewed from the top of the Marble Arch Mound in London, U.K., on Wednesday, Aug. 18, 2021. Britain’s exit from the European Union and the pandemic are adding to inflationary pressures that are starting to slow the U.K. economic recovery, two business surveys show. , Bloomberg

(Bloomberg) -- Starwood Capital Group and London & Regional are exploring the sale of the Hard Rock Hotel in central London.

The firms are working with advisers to solicit interest in the property, which could fetch as much as 500 million pounds ($621 million), a person familiar with the matter said, asking not to be named discussing the effort.

A Starwood representative confirmed the hotel is for sale, declining to comment further. A London & Regional spokesperson didn’t immediately respond to a request for comment.

The Hard Rock Hotel, on the corner of Oxford Street and Park Lane near Marble Arch, was previously known as the Cumberland. Starwood and London & Regional acquired the property in 2010 from Royal Bank of Scotland.

Any sale of the property would be among the largest U.K. hotel transactions since the pandemic. Earlier this year, Singapore’s Fragrance Group agreed to buy the Holiday Inn London Kensington Forum from Queensgate Investments.