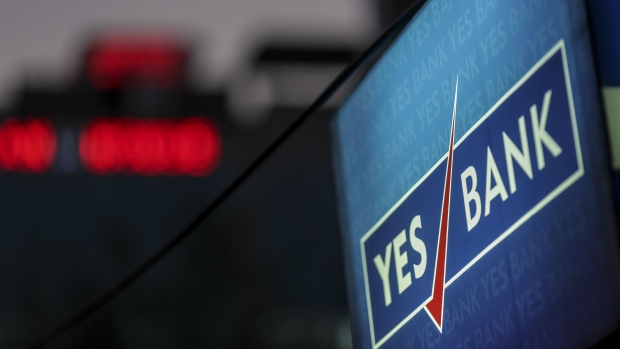 (Bloomberg) -- The head of India’s biggest lender said he’s certain “some solutions will emerge” to steady Yes Bank Ltd., which has been on a prolonged quest to raise new capital.

“Yes Bank is a significant player in the market with an almost $40 billion balance sheet,” State Bank of India Chairman Rajnish Kumar told Bloomberg Television in Davos. “I have a feeling that it will not be allowed to fail,” he added.

Kumar’s statement follows speculation that the government, which controls State Bank of India, may ask the lender to play a role in bailiing out the private-sector Yes Bank. However, last month Kumar said it was “out of the question that SBI will do anything for Yes Bank.”

Yes Bank’s shares have plunged more than 80% over the past year amid worries about its asset quality and uncertainty about its efforts to raise new capital. It’s trying to shore up a core equity capital ratio that’s barely above a regulatory minimum of 8%.

Kumar said it won’t be good for India’s economy as a whole if Yes Bank were to fail. “Because a bank of that size, if it is allowed to fail, there’s a problem,” he said. “And I am sure that some solutions will emerge.”

To contact the reporters on this story: Jeanette Rodrigues in Mumbai at jrodrigues26@bloomberg.net;Haslinda Amin in Singapore at hamin1@bloomberg.net

To contact the editors responsible for this story: Arijit Ghosh at aghosh@bloomberg.net, Marcus Wright