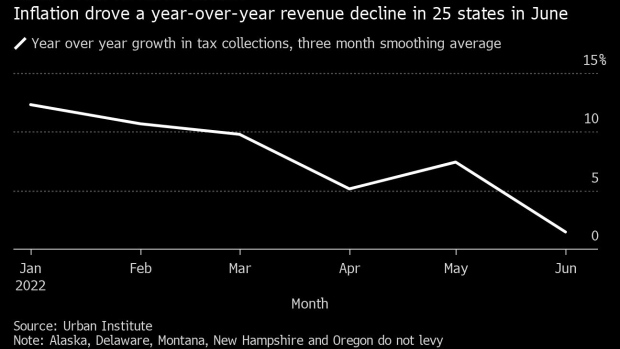 People walk along the Venice Beach boardwalk in Los Angeles, California, U.S., on Tuesday, June 15, 2021. California lifted most of its Covid-19 restrictions Tuesday as part of a grand reopening in which the state will end capacity limits, physical distancing and mask requirements for those that are vaccinated. Photographer: Jill Connelly/Bloomberg , Bloomberg

The number of states that saw year-over-year declines increased to 25 in June from 16 in May, according to the Urban Institute. That declining performance, which is analyzed over a three month rolling average, follows a strong first quarter for sales tax receipts in which nearly every state saw growth in real terms. While state coffers remain buoyed by high sales tax collections this year and record income tax receipts in 2021, changing consumer spending patterns and high prices have triggered a decline in revenues for one of states’ key funding sources at the same time as stock market volatility threatens income tax collections.

“The initial phase is what we expected -- that the tax will be strong because of inflation,” said Lucy Dadayan, a senior researcher at the Urban Institute. “But we also expected that down the road, consumers are going to cut back on their spending.”

As of now, reduced spending is not necessarily worrying for states’ fiscal health, Katherine Loughead, a senior policy analyst at the Tax Foundation, wrote in an email. This is because sales tax revenues were widely expected to decrease after seeing a boost in 2021 due to federal stimulus and a pandemic-era shift to consumption of goods over services, Loughead said. Overall sales tax collections remain above pre-pandemic baselines in most states, even if the rate has slowed. But states should ensure they have enough reserves in the event that “more concerning revenue declines occur in the future,” she added.

Nationwide, sales tax receipts were up 1.5% year-over-year as of June – a sharp drop from the beginning of this year, when revenues were up 12.3% in real terms. Among states that saw sales tax growth in June, nearly every one recorded a substantial drop in growth rates compared to January 2022.

“Inflation typically boosts sales tax revenues in the short-term as consumers continue purchasing goods at elevated prices, but during periods of sustained high levels of inflation in which price increases outpace wage growth, reduced spending is expected,” Loughead said. “This typically leads to sales tax collections declines, especially since many states have exempted a variety of basic goods from their sales tax base.”

Read more: US States Slash Taxes Most in Decades on Big Budget Surpluses

Generally, consumer demand has held up despite inflation, according to non-adjusted Census Bureau data. But this year has seen declines in spending on durable goods like motor vehicles and household equipment due to high prices and reduced demand, Loughead said.

Several states, including California and New Jersey, have projected a slowdown in sales tax growth in the next fiscal year due to shifts in consumer spending patterns and high prices. Nationwide, state revenue forecasts for 2023 show a modest growth of 1.4%, down from 3.2% in 2022, according to a survey by the National Association of State Budget Officers.

In addition to a sales tax slowdown, states are likely to see sharp drops in income tax collections as stock market volatility threatens to wipe out gains in places like California and New York, said William Glasgall, senior director of public finance at the Volcker Alliance. While states are in “very good shape” at the moment, he said, there is “legitimate concern” about a slew of tax cuts that could dry out record reserves.

“Given a strong chance for a recession or at least reduced growth,” Creditsights analysts wrote in a Tuesday note, “revenues may soon begin to slow, and we worry that in some states revenue may fall short of aggressive forecasts.”