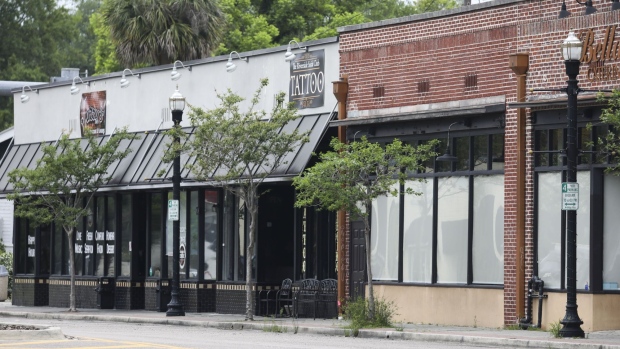 Stores and restaurants stand closed in Jacksonville Beach, Florida, U.S., on Saturday, April 18, 2020. Florida reported a total of 25,269 confirmed coronavirus cases on April 18, this as the state begins to reopen beaches with some restrictions: no sunbathing, no sitting in folding chairs, no coolers. Photographer: Eve Edelheit/Bloomberg , Bloomberg

(Bloomberg) -- State and local governments will need $500 billion in additional federal aid over the next two years to avoid major economic damage from the coronavirus pandemic, according to a Moody’s Analytics report released Thursday.

The budget cutbacks by governments whose revenue is being sharply reduced by business closures could shave as much as three percentage points from the pace of economic growth and result in the loss of about 4 million jobs, wrote the economists led by Dan White, head of fiscal policy research.

State governments alone will face gaps totaling $312 billion through fiscal 2022, according to the forecast. Under a more severe scenario in which a potential second wave of infections leads to another recession, state budgets would have to grapple with deficits totaling $498 billion, a level of stress that hasn’t been seen since the Great Depression.

The Moody’s analysts urged quick federal action given that state and local officials are trying to decide how to balance their budgets that for many start in July and will bear the brunt of the virus impact.

“That will provide state and local government policymakers sufficient breathing room to avoid having to make economically disastrous fiscal decisions, and should a second virus outbreak actually occur, federal policymakers will have plenty of time to consider the prospect of additional aid over future fiscal years if necessary,” they said.