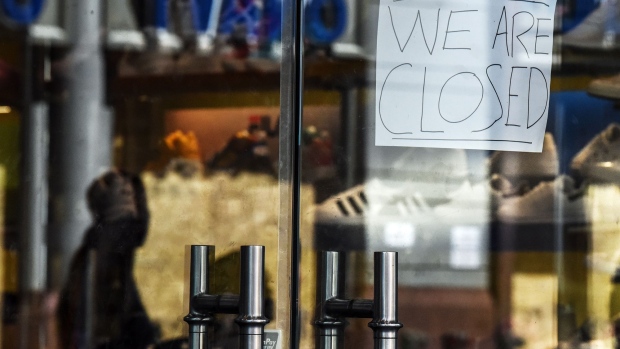 NEW YORK, NY - JUNE 08: A person walks past a sign that reads "we are closed" on June 8, 2020 in the downtown Brooklyn borough business district of New York City. Today marked the first day of the phase one reopening of the economy that includes construction and curbside retail pickup. Many retail stores in downtown Brooklyn remained closed and boarded up. (Photo by Stephanie Keith/Getty Images) , Photographer: Stephanie Keith/Getty Images North America

(Bloomberg) -- U.S. states are facing unprecedented fiscal stress and are poised to draw down their reserves as the pandemic-related shutdowns hammer tax collections, marking a stark reversal for governments that just a year ago were in the strongest financial shape in a decade, according to Conning.

The investment firm, which oversees $8.8 billion in municipal bonds and issues an annual report on states, changed its outlook on their credit quality to negative from stable because of the coronavirus.

“The long-term impact of the Covid-19 pandemic on states’ credit quality will be significant,” Karel Citroen, head of the municipal credit research group at Conning, said in a statement. “States are facing an uphill battle with decreased sales and income tax revenues. They will have to address funding gaps by either using reserves, issuing debt, reducing expenditures and/or increasing revenues.”

U.S. states are projected to see budget deficits of $615 billion through 2022, a bigger hit than they faced in the immediate wake of the last recession, according to the Center on Budget and Policy Priorities.

States with growing populations and strong reserve levels will be able to better weather the downturn, Citroen said in an interview. Utah remains the top-ranked credit, and South Carolina shot up 17 positions in a year to the fifth spot on the back of strong population growth, strong reserves, a growing economy and relatively low fixed costs, according to the report.

However, for states with high fixed costs, like legacy pension liabilities, and low reserve levels -- including Illinois and Kentucky, which Conning assigned the lowest rank -- the crisis will be hard to navigate without major structural changes, Citroen said.

These states risk falling into a “snowball” effect where population loss and high fixed costs translate into a need to increase taxes, which in turn will make them less desirable locations to live, said Citroen. The reverse is also true for the highly-ranked states with growing populations, he added.

“The divergence between the higher ranked states and the lower ranked states is going to increase,” Citroen said in an interview. “It’s so much easier to adjust or react to what we’re seeing right now with Covid-19 if you have the solid tax base to begin with, if you have reserves you can dip into.”