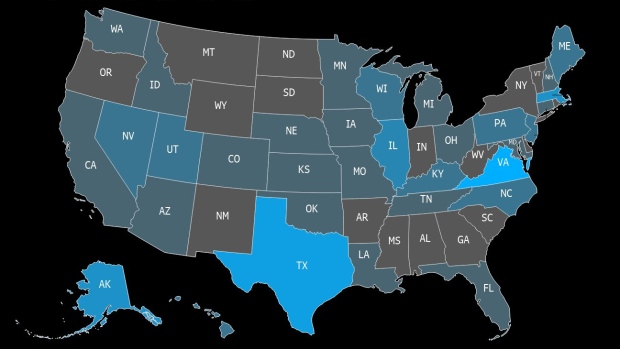 Apartment buildings in the Midtown neighborhood of New York, U.S., on on Monday, July 5, 2021. New York's residential market is heating back up amid the easing of commercial restrictions and lower Covid-19 rates, although the market has yet to return to pre-pandemic levels, Forbes reports. Photographer: Jeenah Moon/Bloomberg , Bloomberg

(Bloomberg) -- The Biden administration’s decision to give renters affected by the worsening pandemic a two-month eviction reprieve risks pushing a housing crisis into the fall if states fail to accelerate distribution of billions in rent relief.

State and local governments nationally have disbursed less than 10 percent of the $47 billion in federal rent aid in the pipeline and now have until Oct. 3 to streamline bureaucracies, hire contractors, improve technology and publicize programs under the order issued Tuesday by the Centers for Disease Control and Prevention.

Several states, such as Oregon and Maryland, say they have made significant progress in the last month. But others, including New York, continue to lag, raising questions about whether the new eviction moratorium will only delay the inevitable in some areas.

Senate Majority Leader Chuck Schumer of New York went to the Senate floor Wednesday morning to call out his home state for doing a “poor job” on distributing rent relief.“Too much of the money is just sitting up there in Albany,” Schumer said.

New York’s state-run program had given out none of its rent relief money as of June 30, the latest federal figures available, and advocates there are dubious officials will turn things around quickly enough to stave off evictions.

The state’s application process is time consuming, confusing for renters and landlords alike and fraught with technical problems, said Ellen Davidson, a staff attorney at The Legal Aid Society in New York.

“It’s not clear that they have the ability to send the money out,” she said.

New York, though one of the poorer performing states, isn’t an anomaly. Even after months spent building the infrastructure to hand out funds, many state programs are still stymied by staffing challenges, technology failures and communication snafus.

If they don’t overcome those challenges, more than 10 million renters could find themselves in the same precarious position they did when the previous eviction moratorium expired Saturday.

“I certainly hope” that an additional 60 days will be enough to get funds flowing, said Andreanecia Morris, executive director of HousingNOLA in Louisiana.“But I’m not confident. We have still not seen, in my opinion, the commitment to getting these dollars out that reflects the urgency of the need.”

Louisiana has received some $300 million in federal rent aid. The Louisiana Housing Corporation administers the program, but its track record is poor, having distributed less than $2 million of $24 million in state rent relief funds earlier this year.

On the local level, Jefferson Parish had to cancel its contract with a private vendor in May after the company charged $1 million in fees -- four times what they actually disbursed to tenants.

It’s time, Morris said, for the federal government to step in.

“That’s what we hoped would happen with this last extension” through July, she said. “Is the Biden administration would have a come to Jesus meeting with these failed administrators, these states who can’t seem to get their act together, and say ‘Look, you either do this, or we find other horses.’”

The Treasury has released guidance for state and local administrators and has reminded grantees that under-performing programs will lose funds beginning Sept. 30, just before the new eviction moratorium expires. But money is still moving at a sluggish pace.

Deputy Treasury Secretary Wally Adeyemo said in a Wednesday statement the department is still seeing states create new hurdles for renters, including documentation requirements that go beyond federal recommendations. The department published examples of simplified eligibility forms based on successful programs around the country.

Adeyemo last week specifically highlighted the application system in Virginia, which along with Texas had distributed more than a third of its allocation as of June 30. By that same date, New York and South Carolina’s state-run programs had yet to disburse a penny.

“If Texas can do it, if Virginia can do it, other states can as well,” White House press secretary Jen Psaki said Tuesday.

Oregon, which first focused on distributing $200 million in separate state-funded rental assistance, has disbursed around 6% of its federal allocation.

Hiring personnel has been the state’s biggest challenge, said Conner McDonnell, a spokesperson for the state’s department of housing and community services. Across the state, 125 local administrative staff and another 60 state contractors are working on the program.

The state plans to double the size of that contract to expedite as many as 8,500 applications in Portland. That’s about 77% of the total applications awaiting review across the state.

“I do actually think 60 days is going to make a significant difference at this point in the process,” said Ann Oliva, vice president for housing policy at the Center for Budget and Policy Priorities.

“Up until now, most places across the country really have been building the infrastructure,” she said. “Sixty days will give folks the time they need to ramp up their capacity and to get money flowing on a more regular basis.”

Georgia has updated its online portal to streamline the application process, said Tonya Cureton Curry, deputy commissioner of housing at the state’s Department of Community Affairs. State officials also are working with community groups and partner organizations to boost the program’s credibility.

In Maryland, where counties run most rental assistance programs, applications opened for many tenants and landlords in mid-May. Maryland had distributed just 7% of their federal allocation by June 30.

But the state is optimistic with its progress in the last month.

“Maryland is now well positioned with the infrastructure and resources in place to provide substantial rent relief for tenants impacted by the pandemic,” the Department of Housing and Community Development said in a statement to Bloomberg News.

Maryland is also engaged in a multi-million dollar awareness campaign, the department said.

A survey conducted by the Urban Institute in May found that more than half of renters and 40% of mom-and-pop landlords were unaware that rental assistance was available — more than five months after Congress first allocated the funds.