Canada’s jobs market blew past expectations for a second straight month, one more sign the nation’s economy is on the cusp of fully recovering from the pandemic.

The economy added 303,100 jobs in March, Statistics Canada reported Friday in Ottawa. That’s triple what economists were anticipating, and follows a gain of 259,200 in February. The two-month jump was led by a rebound in a retail sector hit hardest by closures over the winter. The country has now recovered all but 296,000 of the nearly 3 million jobs lost during the pandemic.

For months, the data have shown an economy gaining strength, surprising even the most optimistic analysts. That resilience is fueling expectations for a strong rebound in 2021 after the economy suffered its sharpest downturn in the post-World War II era last year.It also potentially undermines the case for continued stimulus from Prime Minister Justin Trudeau’s government and the Bank of Canada. 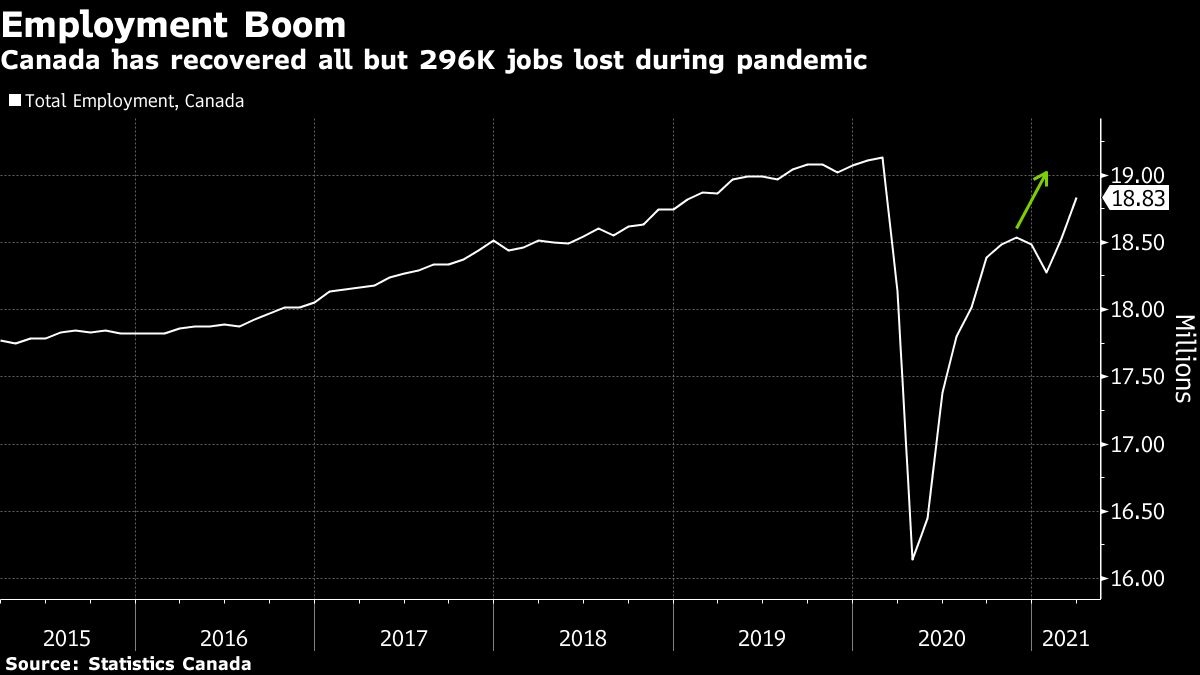 “I think the main message is clearly the economy can recover quickly and jobs can recovery quickly when things do open up again,” Doug Porter, chief economist at Bank of Montreal, said by phone.

The yield on benchmark 10-year Canada government debt was up to 1.513 per cent as of 10:22 p.m. in Toronto, from 1.46 per cent yesterday. The Canadian dollar pared some of its earlier losses, and was trading little changed at $1.2557 per U.S. dollar.

The back-to-back monthly job gains follow stronger-than-expected output data this year that show Canada averted the stall most economists had been anticipating over the winter.

The upbeat numbers are also easing worries about widespread scarring in the labor market, and will only reinforce calls for less stimulus just as Trudeau prepares the release of his first full budget in two years on April 19. Finance Minister Chrystia Freeland has already promised an additional dose of spending, worth as much as $100 billion over three years.

The Bank of Canada is expected to start tightening its ultra-easy monetary policy as early as its next policy decision on April 21. The central bank has pledged not to raise record low interest rates before damage to the economy is fully repaired, particularly in the labor market. But the bounce-bank is catching officials there by surprise as well.

It took Canada 29 months to recover hours worked lost during the global financial crisis of 2008-2009. But they’re now just 1.2 per cent from their February 2020 peak, effectively halving the recovery time.

“While some industries such as travel could continue to face challenges for longer, we see potential for a sustained reopening in the summer to lead aggregate employment levels to normalize before the end of the year,” Veronica Clark, an economist at Citigroup Global Markets Inc., wrote in a report to investors.

Most of the pick-up in hiring was in sectors that suffered lockdowns in December and January, and were allowed to reopen in February and March. Retail trade drove most of the gains, with employment rising by 95,000 as provinces eased restrictions.

There are still plenty of worries. A fresh wave of lockdowns in April will reverse some of the gains in the retail sector. There are still concerns around an uneven recovery with most of the job losses since last year concentrated in a few industries like accommodation and food. Young women, meanwhile, remain disproportionately impacted by the crisis.

“Policy makers still need to tread carefully,” Royce Mendes, an economist at Canadian Imperial Bank of Commerce, said by email. “If this many jobs were added as a result of reopening, then there are more at risk from the recent closures than previously known.”