Canadian employment grew in September for the first time in four months, but gains remained moderate in a sign the labor market continues to be near full capacity.

The country added 21,000 jobs last month, with both full-time and part-time work holding steady, Statistics Canada reported on Friday in Ottawa. That’s in line with the median estimate of a 20,000 gain anticipated by economists in a Bloomberg survey.

The unemployment rate fell to 5.2 per cent as the labor force shrank, reversing part of a 0.5 percentage point jump to 5.4 per cent in August. Hours worked fell 0.6 per cent in September.

The two-year benchmark yield on Canada bonds rose slightly on the release to 4.036 per cent as of 8:42 a.m. Ottawa time. Earlier Friday, it had passed 4 per cent for the first time since 2007. 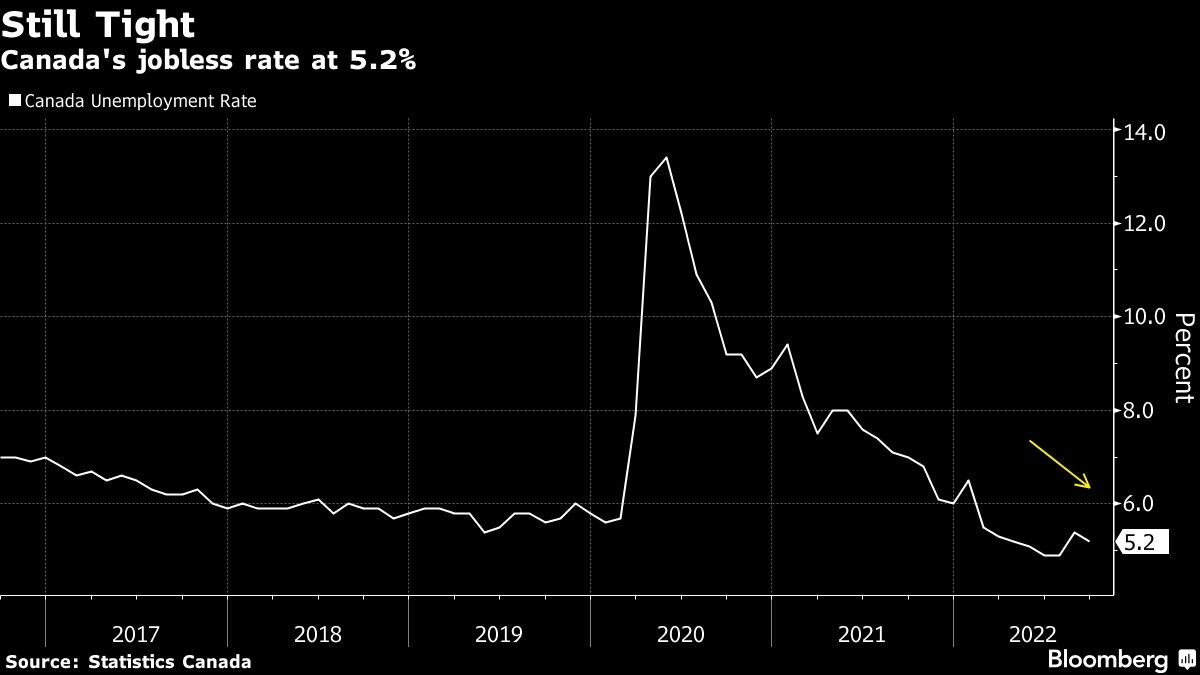 The rise in employment ended three consecutive months of losses from June through August, during which the economy shed more than 113,000 jobs.

The question now is how much of the slowdown is being driven by labor supply factors and how much by higher borrowing costs and weakness in underlying demand. The mix is important to the Bank of Canada, which has been tightening policy aggressively amid worries that demand for labor has far outpaced supply.

Based on a speech Thursday by Governor Tiff Macklem, the Bank of Canada appears to see the labor market at or near full capacity. Macklem said the jobs market remained extremely tight, with wage gains broadening and underlying inflation pressures showing no signs of letting up.

“The recovery was largely driven by a rebound in education jobs. So the gain in September can’t be viewed as a true reacceleration in employment,” said Royce Mendes, head of macro strategy at Desjardins Securities Inc. “Today’s report shouldn’t do much to alter the thinking of monetary policymakers.”

The central bank has already increased borrowing costs by three percentage points since it began tightening policy in March, and markets are pricing in another 50 basis-point increase at the next meeting on Oct. 26.

The participation rate, which has trended downward since May, fell to 64.7 per cent last month, Statistics Canada said, as the number of people in the labor force fell by 20,300. The labor force is down by about 80,000 since May.

The number of public-sector employees rose in September, partially offsetting declines recorded in July and August. Education led gains with a 46,000 increase. Employment was little changed in the private sector and among self-employed workers.

Employment increased in four provinces, led by British Columbia, while there were fewer people working in Ontario and Prince Edward Island.

Average hourly wages rose 5.2 per cent on a year-over-year basis in September, the fourth consecutive month of growth that surpassed 5 per cent. But that’s still below the consumer price index that was at or above seven per cent from May to August.