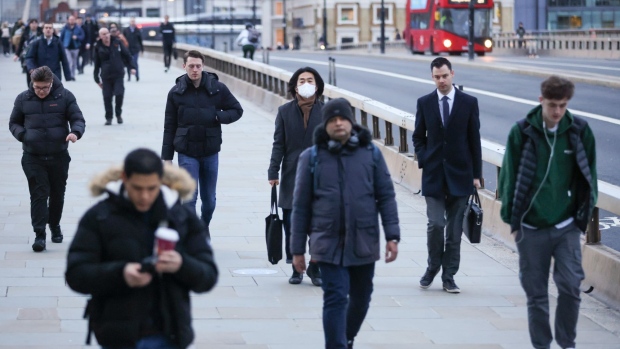 Morning commuters cross London Bridge towards the City of London, U.K., on Tuesday, Jan. 4, 2022. Bankers in London are expecting to start the year at home after the U.K. government recommended a shift to more remote work on Dec. 8, leaving the city quiet even before the Christmas break. , Bloomberg

As the raging omicron variant of COVID-19 infects workers across the nation, millions of those whose jobs don't provide paid sick days are having to choose between their health and their paycheck.

While many companies instituted more robust sick leave policies at the beginning of the pandemic, some of those have since been scaled back with the rollout of the vaccines, even though omicron has managed to evade the shots. Meanwhile, the current labour shortage is adding to the pressure of workers having to decide whether to show up to their job sick if they can't afford to stay home.

"It's a vicious cycle," said Daniel Schneider, professor of public policy at the Harvard Kennedy School of Government. "As staffing gets depleted because people are out sick, that means that those that are on the job have more to do and are even more reluctant to call in sick when they in turn get sick."

Low-income hourly workers are especially vulnerable. Nearly 80 per cent of all private sector workers get at least one paid sick day, according to a national compensation survey of employee benefits conducted in March by the U.S. Bureau of Labor Statistics. But only 33 per cent of workers whose wages are at the bottom 10 per cent get paid sick leave, compared with 95 per cent in the top 10 per cent.

A survey this past fall of roughly 6,600 hourly low-wage workers conducted by Harvard's Shift Project, which focuses on inequality, found that 65 per cent of those workers who reported being sick in the last month said they went to work anyway. That's lower than the 85 per cent who showed up to work sick before the pandemic, but much higher than it should be in the middle of a public health crisis. Schneider says it could get worse because of omicron and the labor shortage.

What's more, Schneider noted that the share of workers with paid sick leave before the pandemic barely budged during the pandemic -- 50 per cent versus 51 per cent respectively. He further noted many of the working poor surveyed don't even have US$400 in emergency funds, and families will now be even more financially strapped with the expiration of the child tax credit, which had put a few hundred dollars in families' pockets every month.

The Associated Press interviewed one worker who started a new job with the state of New Mexico last month and started experiencing COVID-like symptoms earlier in the week. The worker, who asked not to be named because it might jeopardize their employment, took a day off to get tested and two more days to wait for the results.

A supervisor called and told the worker they would qualify for paid sick days only if the COVID test turns out to be positive. If the test is negative, the worker will have to take the days without pay, since they haven't accrued enough time for sick leave.

"I thought I was doing the right thing by protecting my co-workers," said the worker, who is still awaiting the results and estimates it will cost US$160 per day of work missed if they test negative. "Now I wish I just would've gone to work and not said anything."

A Trader Joe's worker in California, who also asked not to be named because they didn't want to risk their job, said the company lets workers accrue paid time off that they can use for vacations or sick days. But once that time is used up, employees often feel like they can't afford to take unpaid days.

"I think many people now come to work sick or with what they call `allergies' because they feel they have no other choice," the worker said.

Trader Joe's offered hazard pay until last spring, and even paid time off if workers had COVID-related symptoms. But the worker said those benefits have ended. The company also no longer requires customers to wear masks in all of its stores.

Other companies are similarly curtailing sick time that they offered earlier in the pandemic. Kroger, the country's biggest traditional grocery chain, is ending some benefits for unvaccinated salaried workers in an attempt to compel more of them to get the jab as COVID-19 cases rise again.

Unvaccinated workers enrolled in Kroger's health care plan will no longer be eligible to receive up to two weeks paid emergency leave if they become infected -- a policy that was put into place last year when vaccines were unavailable.

Meanwhile, Walmart, the nation's largest retailer, is slashing pandemic-related paid leave in half -- from two weeks to one -- after the Centers for Disease Control and Prevention reduced isolation requirements for people who don't have symptoms after they test positive.

Workers have received some relief from a growing number of states. In the last decade, 14 states and the District of Columbia have passed laws or ballot measures requiring employers to provide paid sick leave, according to the National Conference of State Legislatures.

On the federal front, however, the movement has stalled. Congress passed a law in the spring of 2020 requiring most employers to provide paid sick leave for employees with COVID-related illnesses. But the requirement expired on Dec. 31 of that same year. Congress later extended tax credits for employers who voluntarily provide paid sick leave, but the extension lapsed at the end of September, according to the U.S. Department of Labor.

In November, the U.S. House passed a version of U.S. President Joe Biden's Build Back Better plan that would require employers to provide 20 days of paid leave for employees who are sick or caring for a family member. But the fate of that bill is uncertain in the Senate.

"We can't do a patchwork sort of thing. It has to be holistic. It has to be meaningful," said Josephine Kalipeni, executive director at Family Values @ Work, a national network of 27 state and local coalitions helping to advocate for such policies as paid sick days.

The U.S. is one of only 11 countries worldwide without any federal mandate for paid sick leave, according to a 2020 study by the World Policy Analysis Center at the University of California, Los Angeles.

On the flipside are small business owners like Dawn Crawley, CEO of House Cleaning Heroes, who can't afford to pay workers when they are out sick. But Crawley is trying to help in other ways. She recently drove one cleaner who didn't have a car to a nearby testing site. She later bought the cleaner some medicine, orange juice and oranges.

"If they are out, I try to give them money but at the same time my company has got to survive," Crawley said. ″If the company goes under, no one has work."

Even when paid sick leave is available, workers aren't always made aware of it.

Ingrid Vilorio, who works at a Jack in the Box restaurant in Castro Valley, California, started feeling sick last March and soon tested positive for COVID. Vilorio alerted a supervisor, who didn't tell her she was eligible for paid sick leave -- as well as supplemental COVID leave -- under California law.

Vilorio said her doctor told her to take 15 days off, but she decided to take just 10 because she had bills to pay. Months later, a co-worker told Vilorio she was owed sick pay for the time she was off. Working through Fight for $15, a group that works to unionize fast food workers, Vilorio and her colleagues reported the restaurant to the county health department. Shortly after that, she was given back pay.

But Vilorio, who speaks Spanish, said through a translator that problems persist. Workers are still getting sick, she said, and are often afraid to speak up.

"Without our health, we can't work," she said. "We're told that we're front line workers, but we're not treated like it."