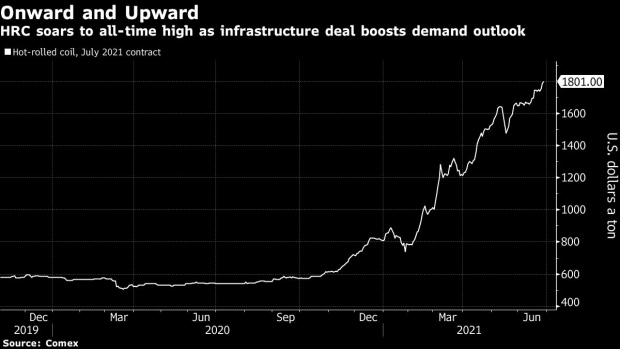 Hot-rolled coil for July delivery rose as much as 0.7% to $1,801 a short ton in New York, an all-time high, after gaining 2.7% since the president secured a $579 bipartisan infrastructure deal on Thursday. Prices have more than tripled in a year.

Commodities from steel to iron ore to copper have gained strongly this year, partly on bets that massive U.S. government spending to rebuild infrastructure including railroads, highways and bridges as economies reopen from the pandemic will boost demand.

The infrastructure spending deal, yet to be passed, includes funding for items ranging from fixing bridges to electrifying buses and upgrading airports and waterways. Biden expects Democrats to ram through an even larger bill with more spending alongside the bipartisan legislation.

The total amount of Biden’s infrastructure plan is likely to be greater than the bipartisan compromise, according to Solita Marcelli, Chief Investment Officer Americas at UBS Global Wealth Management.

“This is a scenario that we do not think markets are fully pricing for yet, and thus could provide a tailwind for the reflation trade if momentum for a “two-bill” track builds,” Marcelli said in a note.

Still, “the nature of much of this spending means it will be spread out over a multi-year period, and tax increases could be part of the mix. So, the stimulative impact on markets overall may not be very large,” she said.

For the industrials sectors, the spending deal “will still be a material step up in spending for companies exposed to roads, bridges, transportation, water and broadband communications,” Marcelli added.

Other beneficiaries would be engineering and construction, steel, and building materials related stocks, according to her.