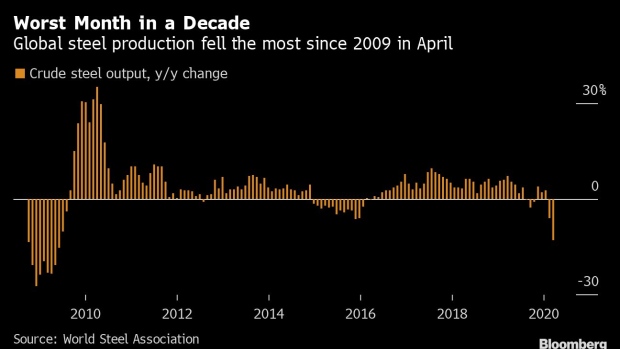 (Bloomberg) -- Steel production, a backbone of the global economy, continued its plunge in April to fresh lows, while a recovery in China couldn’t offset losses elsewhere.

Total output dropped 13% from a year earlier, to 137.1 million tons, the World Steel Association said Friday in a report. That’s the biggest monthly decline since 2009, according to the group’s historic data.

Steelmakers have been struggling to stay afloat this year, cutting projects and salaries and implementing temporary layoffs, as demand from key consumers, especially the automobile sector, has been hit hard by the coronavirus pandemic. The world’s biggest steel producer outside China, ArcelorMittal, likened the suddenness of the virus impact to the global financial crisis. Earlier this month, the company said the second quarter of 2020 could be the low point for the market.

Mills in the European Union, which curbed capacity due to coronavirus-related restrictions and falling demand, cut production by 23% in April from a year earlier, according to the report. The U.S. lost almost a third of its output, while India’s decline topped 65%. China’s production was little changed compared to last year due to restarts in April.

The World Steel Association warned that many of its figures are estimates amid the global health crisis and could be revised later.

So far “this is a significantly better outcome” than during the global financial crisis, Citigroup Inc. said in a separate note on Friday.