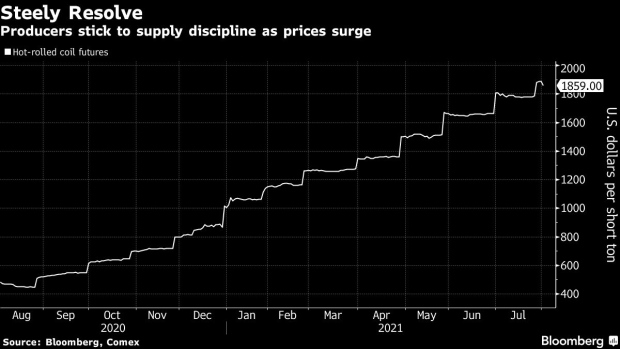 (Bloomberg) -- The record-breaking rally in steel has further to run as producers vow not to get burned again by ramping up too fast.

Prices for benchmark hot-rolled coil futures in the U.S. have surged more than 80% this year, touching an all-time high last week as reopening economies fuel consumption. Despite customer pleas for more metal, steelmakers that paid steep costs to shut down furnaces during the pandemic have yet to announce additional plans to build out capacity, focusing instead on generating record profits for shareholders.

The stance will keep supply tight at a time when demand is soaring and China, the world’s largest producer, is signaling measures to limit its output. Makers of everything from washing machines to wind turbines to toasters are already struggling with raw-materials shortfalls and bottlenecks that have fueled inflation concerns, and the reluctance among steelmakers suggests price relief may be unlikely any time soon.

“The finance departments have a voice they didn’t used to have, so the industry is more driven for profit than it is for production now,” said Michelle Applebaum, an independent steel consultant who has covered the industry for 40 years. “It’s a real culture change.”

U.S. steel consumption is on pace to be about 104 million tons this year, and about 108 million tons in 2022, according to Bloomberg Intelligence analyst Andrew Cosgrove. With domestic steelmakers only producing about 87 million this year and 91 million next year, and planned capacity coming online by the end of next year to be about 4.6 million tons per annum, customers will continue to compete for available metal.

To make matters more difficult, soaring demand across the rest of the globe from China to Europe means U.S. buyers will be battling for imports too. Meanwhile, U.S. tariffs remain on shipments from abroad, hurting affordability.

Cleveland-Cliffs Inc. Chief Executive Officer Lourenco Goncalves told investors last quarter that he wasn’t going to produce more tons because it will eventually lead to oversupply and cause prices to deteriorate.

To be sure, not everyone sees the metal rallying through the rest of the year. Automotive demand isn’t going to be as big as initially projected, as semiconductor snags have forced the industry to build inventories as they wait to be able to make the vehicles, and the market has basically recovered to pre-pandemic demand levels, according to Keybanc Capital Markets analyst Phil Gibbs.

“The supply-demand imbalance is now marching toward equilibrium: this is the last fever pitch of the tightness,” Gibbs said. “Our view on actual demand is that we believe you’re in a modest oversupply situation. The only reason we’re not seeing it in the price is that mills have reasonably long backlogs they’re working through.”

U.S. steelmakers told investors on second-quarter conference calls that backlogs are at historic highs, and that with demand expected to remain high through 2021, they’ll book record profits again in the third quarter. That outlook is further underpinning the outlook for a further rally in steel.