High steel prices have made the market challenging to operate in: Bri-Steel Manufacturing president

The steel industry is booming like never before as the global economy recovers from the pandemic, and the ripple effects are being felt by everyone from home builders to appliance makers.

Demand is so frenzied that U.S. mills have stopped taking orders from customers in recent weeks, according to Dan DeMare, director of sales at Heidtman Steel Products Inc. DeMare said the mills may not begin taking new orders until late summer so that they can clear backlogs.

In a global economy already shaken by supply shortages and inflation worries, the mills’ moves may signal more delivery snags and even higher prices for a commodity key to a wide swath of industries. Across the world, about 500 pounds of it is used per person each year, in everything from paper clips and automobiles to skyscrapers and toasters.

Steel in the U.S. has tripled in 12 months as the swifter-than-expected economic recovery caught producers by surprise, while in China futures reached a record after authorities pledged to lower output in a push to control emissions. Prices have also surged in Europe, so imports may only rise a certain amount even if the U.S. were to lift Trump administration tariffs. 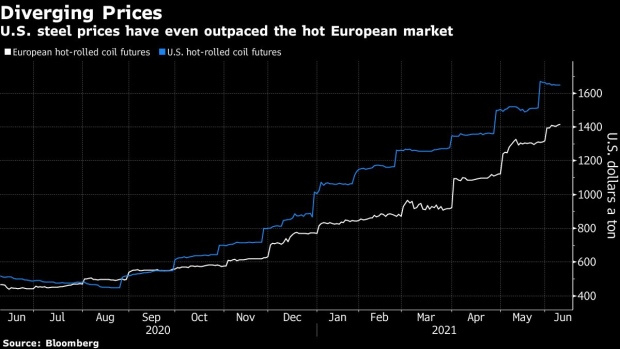 “The sharpness and speed of the moves has been something like I’ve never seen before,” Phil Gibbs, an analyst at Keybanc Capital Markets in Cleveland, said in a phone interview. “I’ve been covering this space now close to 15 years, so I’ve seen some pretty crazy runs.”

While prices have surged across commodities, the 220 per cent jump in U.S. steel in the past year eclipses other high-fliers such as copper and crude oil. A Standard and Poor’s index of steel companies, which includes Nucor Corp., Cleveland-Cliffs Inc. and U.S. Steel Corp., is up 69 per cent in 2021, easily the benchmark’s best performance through the first five months of the year.

The rally seemed unimaginable to steel executives just 10 months ago, who said it could be at least 2022 before metal demand would return to pre-pandemic levels. The quick recovery and slow ramp-up of steel plants drained inventories that were already low during the height of the pandemic.

Lumber, a market where producers were also caught short amid a surprise surge in housing demand, is one of the few materials with comparable gains. And even home builders are having to reckon with the impact of tight steel supplies.

Carl Harris, who has spent 36 years building homes, said he’s looking at two-month delays on refrigerators, ranges and dishwashers. Delivery times that are normally two to three weeks are now as much as half a year in many parts of the country, he said.

The lag means Harris can’t install the appliances package to market the two-bedroom empty-nester home in Newton, just outside Wichita, Kansas, even though the rest of the house is ready. He said other builders in the area are also having trouble getting plumbing fixtures, which have to be in place before a certificate of occupancy is issued.

“A lot of steel goes into appliances, so we’ve seen a huge backlog in getting some of the appliances so we can close these houses,” Harris, who is a managing partner at Harris Homes in Wichita, said in a phone call. “We’re seeing significant shortages.”

It’s also getting more expensive to drill in the shale patch as rising prices for steel, cement and other supplies and services lead to higher costs for explorers, according to Citigroup Inc. Steel prices for the drill pipe used in new wells could rise about 50% in 2021, Citigroup said.

Executives at Ford Motor Co. said on a first-quarter conference call that the company has seen commodity prices increase primarily for aluminum, steel and precious metals. It expects to see about a US$2.5 billion increase in commodities from the second through fourth quarters, “so that’s going to hit us as we go through the rest of the year,” said John T. Lawler, Ford’s chief financial officer.

There’s a risk that the elevated prices could start to cause buyers to balk, or look for substitutes where possible.

“At some point, this causes demand destruction,” Keybanc’s Gibbs said. “Try to buy an appliance, a new house -- everything is giving more sticker shock.”

There are also some signs that the supply crunch could improve.

U.S. steelmakers are expected to bring on about 4.6 million annual tons of production capacity by the end of 2022, according to Andrew Cosgrove at Bloomberg Intelligence, an increase of about four per cent from current levels. Also, surging prices have given President Joe Biden’s administration reason to consider removing Trump-era tariffs on steel imported from the European Union.

And in China, the world’s top steel consumer and producer, the government has frequently reiterated its commitment to curb record output since late last year. Still, the country’s mills are churning out unprecedented volumes of steel.

But for now steel customers looking for immediate supplies, or spot metal, are having to pay more and wait longer.

“There’s not a lot of spot availability,” Heidtman Steel’s DeMare said in an interview. Mills “have limited their order books, put a cap on the number of orders so they can start to get caught up.”