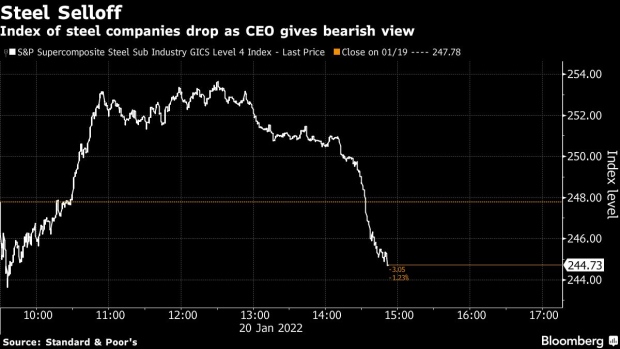 (Bloomberg) -- The North American steel market is in for some rough months ahead, with excess supplies, rising inventories and shrinking demand, according to the head of Stelco Holdings Inc. Steelmaker shares fell.

“It’s a falling knife,” Stelco Chief Executive Officer Alan Kestenbaum said Thursday in an interview. “The question is when does it go the other way and where are we in the economic cycle? I think it turns at some point, but I don’t know where it bottoms out.”

The grim view for 2022 follows a stellar year for the industry, with the largest U.S. steelmakers expected to post record full-year earnings after domestic steel prices surged as much as 94% to an all-time high of nearly $2,000 a short ton. Kestenbaum was the first steel CEO to publicly sound the alarm two weeks ago when he warned investors that his company’s steel shipments are taking a hit as the rapid spread of omicron accelerates absenteeism internally and even more among customers’ work crews.

Share of Stelco fell alongside the major U.S. steelmakers following Kestenbaum’s comments. The Canadian producer fell 4.7% at 2:54 p.m. in Toronto, while Nucor Corp., U.S. Steel Corp. and Cleveland-Cliffs Inc. erased gains for the day. An index of 14 steel companies dropped as much as 1.7%.

The situation is especially negative delivering into the automotive and construction sectors, with those industries reporting inventories are rising and customer demand is drying up, the head of the Hamilton, Ontario-based steelmaker said.

“When I spoke two weeks ago, there was a lack of visibility. Now we have vastly more and it’s pretty clear what’s happening: significant oversupply and significant shrinkage of demand right now and you’re seeing it in the inventory numbers,” he said

Steel shipments in the U.S. and Canada have plunged 17% since August and inventories have climbed 15% in the same period, according to data from the Metals Service Center Institute. Benchmark steel prices are down more than 26% since touching an all-time high at the end of August. And analysts at Bloomberg Intelligence said inflationary pressures and demand slowdown could make it harder for steel sector stocks to outperform in 2022.

“I don’t think there will be a choice but for people to acknowledge in the next couple weeks we’re in a difficult environment,” Kestenbaum said.