Canada's recovery is lagging so government support will be needed: CIBC's Tal

VIDEO SIGN OUT
The fresh wave of COVID lockdowns in Canada is having little impact outside close-contact sectors like retail, easing worries about spillover effects and long-term scarring from the restrictions.

Employment in Canada fell more than expected in January, with a loss of 212,800 positions that reversed five months of gains, the country’s statistics agency reported on Friday. But the entirety of the drop was in part-time work, concentrated in a few sectors and confined to the two provinces with the toughest measures -- Quebec and Ontario.

That’s stoking confidence in the underlying strength of the recovery and the view that the economy will quickly rebound as authorities begin to ease containment efforts.

“The report was weaker than expected, but once we sifted through the numbers, they weren’t quite as bad as the headline,” Brett House, deputy chief economist at Bank of Nova Scotia said by phone. “We don’t think it changes the overall narrative.” 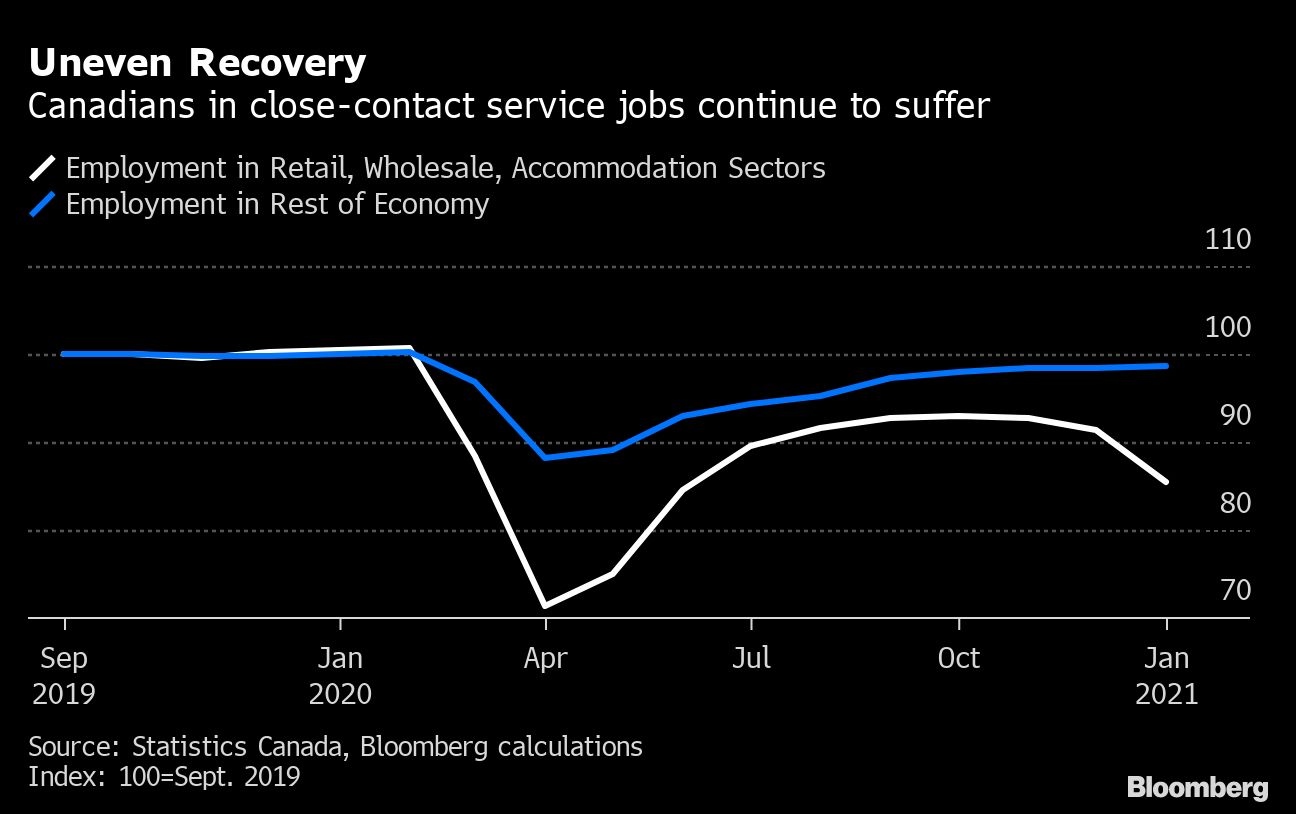 To be sure, the numbers put a bit of a damper on what has become an increasingly optimistic consensus in recent weeks. The global vaccine rollout, rising commodity prices that help Canada and potential impacts from more fiscal stimulus in the U.S. are driving more upbeat predictions.

A report last week showed the economy grew more quickly than anticipated at the end of 2020, even amid a new wave of lockdowns. Some analysts are even questioning whether a widely projected first-quarter contraction will materialize after all.

Even with the employment drop in January, the data don’t necessarily translate into lower economic activity, economists said. Full-time jobs actually increased slightly in January, driving total hours worked up 0.9 per cent on the month despite the massive decline in part-time positions.

“A second consecutive monthly drop in employment in January was concentrated in sectors most impacted by the pandemic, namely retail, restaurants and bars. Though cuts were larger than expected, they were also concentrated in part-time workers and in industries that we expect to reopen when the public health crisis abates, limiting implications for the outlook.”

Wholesale, retail, accommodation and food service employment remains down about 15 per cent from pre-pandemic levels -- employment in other sectors has recovered to within 2 per cent compared with February 2020.

The lockdowns were also an Ontario and Quebec phenomenon. The country’s biggest provinces had seen a sharp increase in virus cases, requiring new restrictions -- including stay-at-home orders and curfews -- that triggered fresh lay-offs. Excluding those two provinces, however, employment rose in January.

Canada’s labor market is also faring better now than it did during the first wave of restrictions in March and April, when employment fell by 3 million, suggesting businesses are adapting. More than 850,000 jobs have yet to be recovered.

The jobs report “is certainly a little jarring but if one looks past the temporary impact of Covid measures, some of which have already been rolled back, the data does not look that bad,” Toronto-Dominion Bank strategists including Andrew Kelvin said in a report to investors.

Canada’s currency also shrugged off the report, climbing against the U.S. dollar after U.S. payroll numbers also came in shy of expectations. The loonie was trading 0.5 per cent higher at $1.2765 against the greenback at 1 p.m. Toronto time, though it dropped against most other major currencies.

The country’s vaccine program, while behind schedule, is also progressing. And Ontario and Quebec have already begun to relax some of the more stringent measures amid a decline in new cases.

“An improving health situation along with ramped up vaccinations should support a sustained easing of health restrictions and a quick resumption of economic and job growth,” Tony Stillo, an economist at Oxford Economics, said in a report to investors.