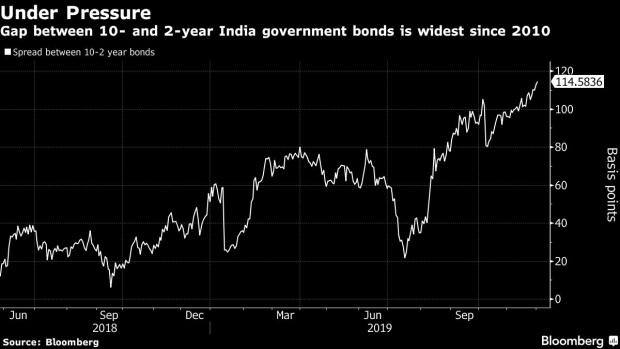 The yield spread between the most-traded 10-year notes to two-year debt is at its highest since 2010 on concerns the government will expand record bond sales. Firstrand Bank Ltd. expects the difference to widen by as much 20 basis points from Monday’s 115.

“As long as there is a lack of clarity on how the fiscal deficit targets will be met and as long as the RBI maintains it’s not bothered about market yields, the curve will continue to get steeper,” said Mahendra Jajoo, head of fixed income at Mirae Asset Global Investments Co. in Mumbai.

Policy makers have taken multiple measures to arrest the slowdown in recent months, while leaving much of the stimulus burden to the Reserve Bank of India. Authorities now have to make the difficult choice between slipping on the deficit target of 3.3% of GDP this fiscal year to boost growth or prolong the pain by cutting expenditure.

Data on Friday evening showed gross domestic product grew 4.5% in the September quarter from a year earlier, the first time it’s been below 5% since 2013.

The weak GDP print will likely pave the way for a sixth interest-rate cut of the year later this week, helping to anchor yields on the short-end of the curve.

Meanwhile, growing skepticism about the government meeting its budget targets means long-tenor bonds are under pressure despite and more than 2 trillion rupees ($28 billion) of excess liquidity in the banking system. The yield on 10-year notes was little changed at 6.47% on Monday.

“There are indications that it is going to be very difficult to meet the deficit targets,” said Jajjo. “Everybody is looking forward to the RBI for its guidance on the yield curve steepening,” he said.

To contact the editors responsible for this story: Tan Hwee Ann at hatan@bloomberg.net, Ravil Shirodkar