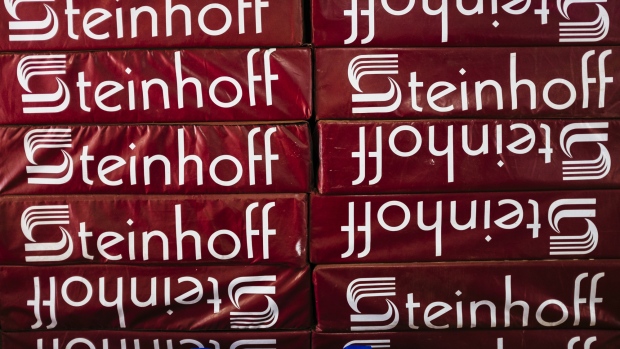 Rugby training shields advertising Steinhoff International Holdings NV sit in storage at the University of Stellenbosch rugby field in Stellenbosch, South Africa on Friday, Jan. 26, 2017. Markus Jooste, former CEO of Steinhoff International Holdings NV, is at the center of the accounting scandal that’s wiped some $14 billion off the retailer’s market value and roiled the wealthy enclave of Stellenbosch, where many prominent business leaders live, work and play. , Bloomberg

The struggling retailer is seeking a combined 1.1 billion rand ($72 million) from La Grange and ex-Chief Executive Officer Markus Jooste for failing to prevent an accounting crisis that almost destroyed the company in late 2017. Jooste quit the day financial irregularities were first reported and La Grange was suspended eight months later.

Jooste said last week that Steinhoff’s claim for more than 850 million rand against him dating back to 2009 is “vague and embarrassing.” Now La Grange has filed his response to the claim, saying it lacks “sufficient allegations” to sustain action against him, according to documents filed to the High Court in Cape Town on Wednesday.

La Grange, who became group CFO in 2013, has given Steinhoff 15 days to withdraw the complaint and argues that if it’s determined the retailer’s claim doesn’t stand up, the company should pay the legal costs.

Steinhoff has highlighted a lengthy list of lawsuits as a significant threat to its ability to operate as a going concern. The claims against the company amount to at least 6.2 billion euros ($6.9 billion) and relate to the share-price collapse triggered by the accounting scandal, which demolished a number of peoples’ savings.

According to separate court papers, Steinhoff is looking to consolidate several of the claims against it, including from former Chairman Christo Wiese, who is demanding about 59 billion rand.

To contact the reporter on this story: Janice Kew in Johannesburg at jkew4@bloomberg.net

To contact the editors responsible for this story: Eric Pfanner at epfanner1@bloomberg.net, John Bowker, John Lauerman