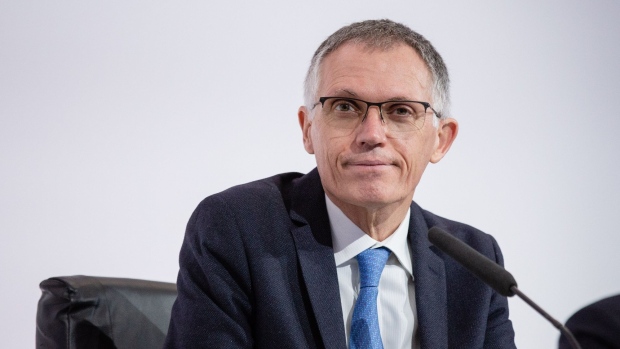 (Bloomberg) -- The ongoing chip crisis has fractured relationships between automakers and top-tier suppliers that failed to secure semiconductors for their customers, according to the head of the world’s fourth-largest automaker.

“We, the auto industry, were supposed to be protected by our Tier 1s from this kind of situation,” Tavares said in a meeting with reporters in Detroit. “The discussion with Tier 1s is, ‘What are you doing on your side to make sure this doesn’t happen again?’”

After struggling for the better part of this year to obtain crucial semiconductors needed to make vehicles, Stellantis on Tuesday unveiled a nonbinding accord with Foxconn owner Hon Hai Technology Group for the design of four new families of automotive chips. By sidestepping traditional partsmakers and dealing directly with the chip manufacturer, Tavares said the pact will cover more than 80% of the automaker’s needs.

The chip shortage has roiled the global auto industry, forcing plant shutdowns and tough choices about which models to prioritize while supplies remain tight. Stellantis has said it could lose production of more than 1.4 million vehicles this year. The automaker was created in January following the merger of Fiat Chrysler and France’s PSA Group.

Semiconductor constraints have pushed the Jeep maker to find new opportunities to save money by reducing complexity with components, Tavares said. The preliminary agreement with Foxconn calls for the chips to be available for use in vehicles in 2024, helping to stabilize the supply chain, Stellantis said.

The company’s confidence in traditional Tier 1 suppliers to secure chips has been shaken and it’s not clear if that will recover, Tavares said.