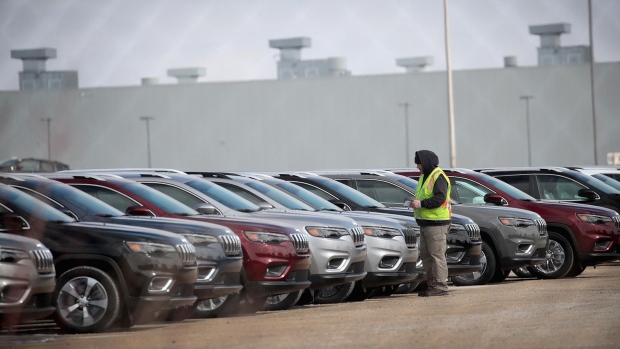 BELVIDERE, ILLINOIS - FEBRUARY 27: Jeep Cherokees sit on a lot at Fiat Chryslers's Belvidere Assembly Plant on February 27, 2019 in Belvidere, Illinois. Fiat Chrysler, the third-largest automaker in the U.S., has said it would lay off more than 1,300 of the 5,300 workers at the facility because of slowing sales for the Jeep Cherokee which is only built at the Belvidere plant. (Photo by Scott Olson/Getty Images) , Photographer: Scott Olson/Getty Images

(Bloomberg) -- Stellantis NV plans to idle a Jeep-making factory in Belvidere, Illinois, citing challenges such as cost burdens due to the shift toward electrification of more models.

The automaker said in a statement Friday that the “difficult but necessary action,” effective Feb. 28, will result in layoffs of an unspecified number of workers, which will likely extend for more than six months.

“Our industry has been adversely affected by a multitude of factors, like the ongoing Covid-19 pandemic and the global microchip shortage, but the most impactful challenge is the increasing cost related to the electrification of the automotive market,” the company said.

Stellantis and other carmakers are spending billions to electrify their lineups with new battery factories and vehicle assembly plants, leaving the future murky for facilities like Belvidere that specialize in vehicles with internal combustion engines. Executives at the company have warned the auto industry may “collapse” under the weight of electric vehicle costs.

Stellantis said in March that it would cut its workforce at the plant, which manufactures the Jeep Cherokee model, without disclosing the number of employees affected. That was the latest in several job reductions at the facility.

“We are all deeply angered by Stellantis’s decision to idle the Belvidere Assembly plant without a plan for future product,” Cindy Estrada, a UAW vice president and head of its Stellantis department, said in a statement posted Friday on the union’s website. “It is an insult to all taxpayers that they are not investing that money back into our communities.”

Stellantis, which was formed from the merger of PSA Group and Fiat Chrysler, said it would try to place laid off employees in other jobs if positions become available. The company also said it was looking into opportunities to use the Belvidere plant for other purposes but has no specific plans it is ready to disclose.

The plant, located about 75 miles northwest of Chicago, dates from the early 1960s. It was retooled as part of a $350 million investment in which production of the five-passenger compact Cherokee SUV was moved from a plant in Toledo in 2017. The factory started a second shift in 2019, but that was scaled back to a single shift in July 2021.

--With assistance from Keith Naughton.

(Updates with shares, other details beginning in fourth paragraph)