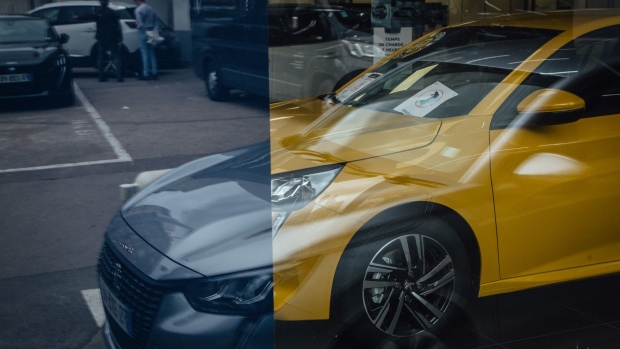 A Peugeot 208 automobile inside a Peugeot showroom, operated by Stellantis NV, in Paris, France, on Tuesday, May 4, 2021. Stellantis reports first quarter earnings on May 5. Photographer: Cyril Marcilhacy/Bloomberg , Bloomberg

Peugeot, which became part of Stellantis when PSA Group merged with Fiat Chrysler early this year, must pay 10 million euros ($12 million) bail and provide a 30 million-euro bank guarantee, according to a statement Wednesday. The company said it’s in the process of assessing its defense options and that its Citroen and Fiat Chrysler subsidiaries also have been summoned before a Paris court.

The disclosure follows VW and Renault’s announcements this week of charges over similar accusations. The French charges spring from a judicial investigation opened in early 2017, days after VW settled criminal and civil complaints with the U.S. related to its use of illegal devices to circumvent emissions tests with diesel vehicles.

The allegations against Stellantis could prove a further distraction from efforts by Chief Executive Officer Carlos Tavares to integrate PSA and Fiat into one of the top global carmakers. Since the two combined in January, he’s had to deal with the global semiconductor supply crisis impeding production across the industry.

In France, investigative magistrates can charge companies or individuals when there are “serious or consistent” clues showing likely involvement. They can then decide whether to refer a case to trial but aren’t involved after that stage.