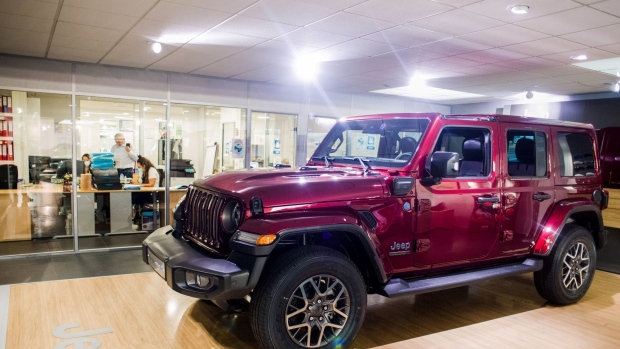 (Bloomberg) -- Stellantis NV raised its full-year profitability forecast substantially as strong demand and pricing carried the carmaker to much better-than-expected results for the first half.

Adjusted operating income margin will be about 10% for the year, the automaker formed from the merger between Fiat Chrysler and PSA Group said Tuesday. Stellantis notched an 11.4% return in the first six months, more than double the low end of the range forecast in March.

Stellantis and its biggest carmaking peers have raised prices and sold a richer mix of higher-end vehicles due to the production constraints brought about by the semiconductor shortage. The issue cost the company production of about 700,000 vehicles in the first half, and the impact will be similar for the remainder of the year, Chief Financial Officer Richard Palmer said on a call with reporters.

“It was a very strong quarter,” Palmer said. The company expects the chip situation in the third quarter to be roughly in line with the prior three months and potentially improve toward year-end.

North America was the company’s standout region in the first half, bolstered by Fiat Chrysler’s Jeep SUV and Ram truck brands. Net revenue soared 42% to 32.4 billion euros, and the company earned a 16.1% margin.

Stellantis raised its industry sales outlook for the U.S. market to 10% growth this year, from 8%, and reiterated that it expects 10% expansion in Europe.

Chief Executive Officer Carlos Tavares last month unveiled a plan to plow 30 billion euros into electric cars and software. Stellantis will shift to battery power quicker in Europe -- which has proposed phasing out combustion engines by 2035 -- than in the U.S. and keep plug-in hybrids in the mix.