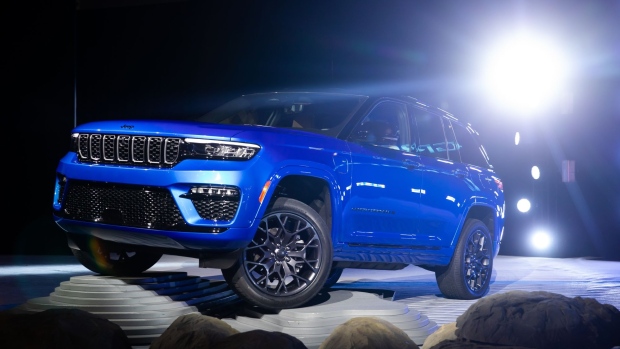 A Jeep Grand Cherokee 4xE electric vehicle (EV) is unveiled during the 2022 New York International Auto Show (NYIAS) in New York, U.S., on Wednesday, April 13, 2022. The NYIAS returns after being cancelled for two years due to the Covid-19 pandemic. , Bloomberg

(Bloomberg) -- As Europe pushes to phase out combustion-engine cars, one of the region’s biggest automakers warns that their battery-powered replacements are still too expensive to avoid demand destruction.

If EVs don’t get cheaper, “the market will collapse,” Deboeuf told reporters at the company’s Tremery factory in France. “It’s a big challenge.”

The maker of Fiat, Jeep and Peugeot autos is planning to introduce more than 75 fully electric models this decade and transform at least some of its French car plants to make EVs. While the company is spending big on the rollout, it’s pledging to maintain strong returns, relying on extra revenue from software and services as well as some premium vehicles.

European Union countries this week endorsed a push to eliminate carbon emissions from new cars by 2035. With EU lawmakers in favor of giving up fossil fuels in the auto industry, it’s highly likely that most manufacturers will have to shift to producing EVs in little more than a decade.