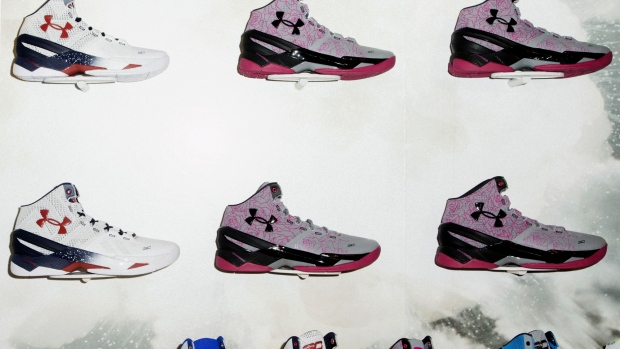 (Bloomberg) -- NBA superstar Steph Curry and a young fan from California have pushed Under Armour to include girls in the marketing and sales of the basketball star’s signature shoe.

Until recently, Under Armour’s website listed the Curry 5 as an option in the menus for men, women and boys. Though the shoe’s sizes are the same for all kids regardless of gender, it wasn’t listed for girls.

Earlier this week, a 9-year-old California girl named Riley Morrison wrote an open letter to Curry, posted online by her father, in which she says she was disappointed to see the shoes were listed only for boys. “I know you support girl athletes because you have two daughters and you host an all-girls basketball camp,” she wrote. “I hope you can work with Under Armour to change this because girls want to rock the Curry 5’s too.”

Curry, who has been with the Baltimore-based company since 2013, was quick to respond. Thursday he posted a letter to Morrison on Twitter saying he’d spent the past two days working with the company to fix the issue. “We are correcting this now!” he said.

Under Armour said in a statement that it is “correcting a simple yet critical error.” The company will start listing the shoes under co-gender “Grade School” sizing, and will make the same change on boxes starting with the Curry 6s next year.

Curry drew praise earlier this year for hosting a free all-girls camp in California. In his letter he told Riley that he’d send her a pair of the current shoes, and that she would be one of the first kids to receive a pair of the next iteration. He also invited her to celebrate International Women’s Day with him next March.

To contact the reporter on this story: Eben Novy-Williams in New York at enovywilliam@bloomberg.net

To contact the editors responsible for this story: Janet Paskin at jpaskin@bloomberg.net;Nick Turner at nturner7@bloomberg.net