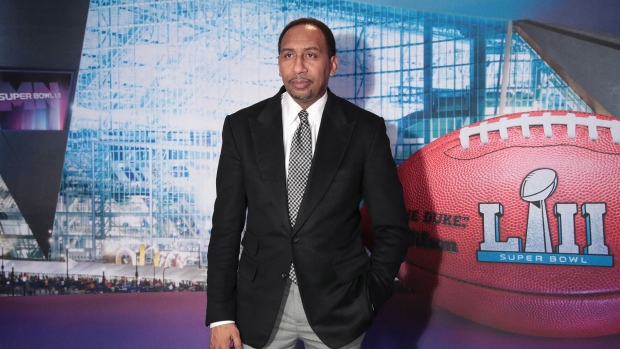 (Bloomberg) -- Stephen A. Smith has a radio show, a TV show and a column. Now the star sports commentator wants to start a podcast.

Smith, one of the highest-paid personalities at ESPN, has met with companies such as Spotify Technology SA about creating a podcast or network of audio shows, according to several people familiar with the talks. The conversations were preliminary and no deal is yet being negotiated, said the people, who asked not to be identified because the talks are private.

Smith is one of the most powerful figures at ESPN, where he is the costar of “First Take,” a morning sports talk show, and a regular on “SportsCenter” and coverage of the National Basketball Association. He also hosts a radio show for ESPN. Smith earns a reported $12 million a year from the network, which is owned by Walt Disney Co.

Smith signed a five-year deal with ESPN in 2019 and has no plans to leave the company, the people said. ESPN operates a large podcast network and could accommodate a show from Smith. But the parties have also discussed carving podcasts out of Smith’s contract so he could shop for a deal elsewhere.

Retaining control of podcast rights could allow Smith to follow in the footsteps of other high-profile sports-media figures who have built lucrative audio ventures. Smith’s former ESPN colleagues Colin Cowherd and Bill Simmons have parlayed podcasts into businesses worth millions of dollars.

Simmons sold his company the Ringer, which he built after leaving ESPN, to Spotify for about $250 million. But Cowherd has built a podcast network called the Volume outside of his deal at Fox Sports, where he hosts a TV show. Cowherd’s arrangement could provide a template for Smith to follow.

Born and raised in New York City, Smith started his career as a local sports journalist in North Carolina and later wrote a column for the Philadelphia Inquirer. He began working with ESPN in 2003 as an NBA analyst.

Podcasts are popular among younger sports fans in particular, many of whom no longer watch cable networks like ESPN, or watch less frequently than in the past.