Stephen Harper and Felipe Calderon headline a posse of speakers at VRIC 2022 - BNN Bloomberg
{{ currentBoardShortName }}
Markets
As of: {{timeStamp.date}}
{{timeStamp.time}} 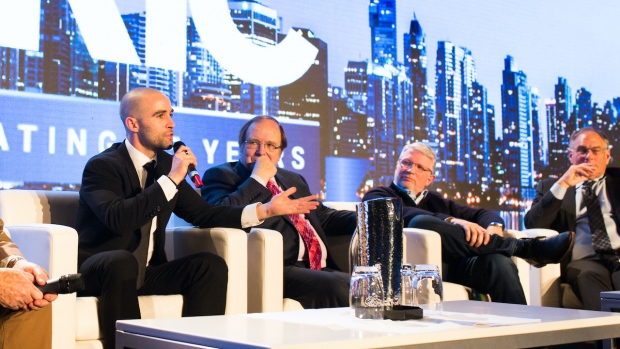 It seems the only thing certain about the outlook for the global investment landscape is uncertainty. A new order is rising as the planet slowly puts the COVID-19 pandemic behind it. Governments have had to take unprecedented measures economically and socially to prevent collapse and are now faced with having to shape a post-pandemic new “normal”.

But the new normal is already facing disorder, like the destabilising war in Ukraine and growing civil unrest in many countries. Market volatility and inflationary pressure add to the uncertainty. Many investors are hesitant to put their money into such a confusing financial landscape.

Whatever the new normal may bring, one thing is certain — it's never been as important for investors to pay attention to trends and think critically to protect their financial future. More than ever, due diligence is needed to make wise decisions to protect investments. But where do they start?

Investors who want to do some serious homework can take a master class at the Vancouver Resource Investment Conference 2022 (VRIC). Being held at the Vancouver Convention Centre May 17 to 18, the conference features over 100 macro finance keynote speakers and 225 commodity investment opportunities for the expected 4,000+ investors attending.

VRIC is the first in-person event staged by host Cambridge House International since January 2020. CEO Jay Martin says it will “give investors face-to-face contact with financial players and analysts who can help make sense of a volatile investment scene.”

"I think there's more volatility, uncertainty and chaos in our near future, so it's tough to know where to find a safe place for your money," says Martin.

"As if we didn't have enough economic uncertainty, geopolitics are becoming a lot less stable with the Ukraine-Russian war, the increasing intensity of populist uprisings all over the world, and layer on top of that just completely unprecedented fiscal and monetary policy heading towards probably a new definition of money."

Martin says investors should try to make personal connections with vendors and speakers and pay attention to their experience and advice. As an investor himself, he's particularly interested in what's happening in the mining space.

"We'll have 245 vendors on the floor and investors should be looking at the commodity sector right now because of the balance sheets of the mining companies," says Martin.

Investors would also be well advised to pay special attention to the company CEOs and executives in attendance who put their own money into their companies. Martin says the conference has been designed to put participants in contact with executives "who have skin in the game." And the best way to find out if they do is to have a conversation with them.

"The CEOs of these companies want to meet you. They want to have a conversation and you should go meet them — they're not hard to talk to, so go shake their hand," says Martin.

"It's a people-driven business."

Martin says participants should also keep their eyes glued to the main stage, where some heavyweight keynote speakers will deliver their insights on investment strategies. Cambridge House International has landed some big names for VRIC 2022.

"We haven't been able to do a conference for two years, so I decided if we're going to do this, we’re going to do it bigger and better than we ever did in the past and I'm only going for home runs," says Martin.

"We threw a ton of Hail Marys to try to get the biggest names possible to join us in Vancouver and I couldn't be happier with the results."

Two of those big names are the 22nd Prime Minister of Canada, Stephen Harper and former Mexican President Felipe Calderon. Martin says they were chosen because of their experience in dealing with the crisis of confidence in the U.S. dollar in 2008 and a similar chaotic, uncertain financial situation to that of investors now.

"I invited them because they participated in all the closed-door meetings with George W. Bush in 2008, which was the last time the entire world collectively began to lose confidence in the U.S. dollar," says Martin.

"They were privy to the inside intelligence on how you rebuild confidence and monetary policy. We're now back in a similar situation and they will have some insights to give."

While Harper and Calderon may be the headliners, Martin says the conference is stacked with other entertaining and engaging speakers who are experts on everything from commodities to corruption. They include Nomi Prins, author of Collusion, precious metals analyst Jeff Clark and investor and speculator Rick Rule.

"I'm a big fan of Rick Rule. He's been a mentor of mine for decades and he's super generous with his time and an incredibly talented investor," says Martin.

"Another favourite of mine is David Rosenberg of Rosenberg Research Associates. He's one of the most intelligent macroeconomists and without question one of Canada's most influential businessmen."

Investors can expect an intense — but fun — financial boot camp

With all that packed into two days, investors can expect an intense learning experience that Martin likens to a financial boot camp — only a lot better.

"Learning has got to be fun, so we have a handful of provocative subjects. I'll be asking provocative questions, including to the former world leaders, to get a rise out of them," says Martin.

"We're going to have amazing talent up on the stage. And I love having a conversation that's both informative and fun."

Those wishing to join the conversation can register for VRIC 2022 at: