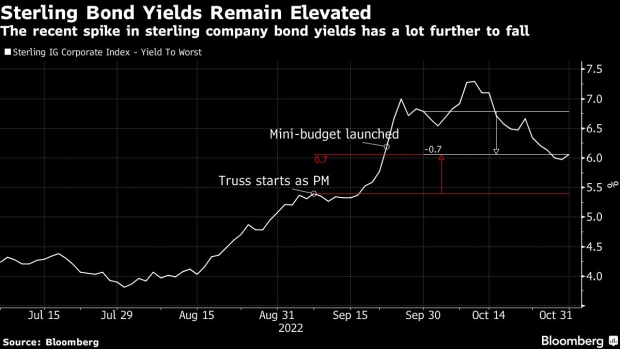 (Bloomberg) -- Sterling corporate bonds just capped their best month since 2009, yet still have a long way to go to retrace the damage done by Liz Truss’s turbulent reign.

An index of high-grade sterling company debt saw yields drop by about 73 basis points in October, the most since August 2009, according to data compiled by Bloomberg. They remain about 70 basis points higher than when the former prime minister took power in early September, which sparked a record climb in yields that month.

The move signals bond investors are calmer with Truss’ replacement Rishi Sunak, with reversals on the unfunded tax cuts that led to the market chaos. However, the jury is out on whether the rally can be sustained, given the Bank of England is starting to sell debt just as the government prepares to detail plans for greater borrowing this month.

“The interesting point for me on just how much more comfortable the market is with Rishi Sunak was the lack of response/sell off on the news that the fiscal statement was delayed from end of October to mid-November,” said Dillon Lancaster, a fund manager at TwentyFour Asset Management. “During the tenterhooks of the Truss regime, that kind of news would have been punished.”

For now, pound company bond spreads have eased to about 228 basis points, following the moves in underlying UK government bonds. Benchmark 10-year gilt yields have slid to about 3.5% from a peak above 4.6% last month in the wake of Truss’ mini-budget.

It’s been a tough year for bondholders, with losses on sterling notes of 21% bigger than those for equivalent euro and dollar corporate bonds. Still, the recent rally has all but erased the premium of sterling company bonds over equivalent dollar notes, which reached 150 basis points just a few weeks ago.

“There have been some great buying opportunities this month but I think now it’s a bit less obvious considering the rebound,” said Tom Moulds, a senior portfolio manager at BlueBay Asset Management. “Sterling credit can trade tighter from here but it probably doesn’t outperform credit in other currencies.”