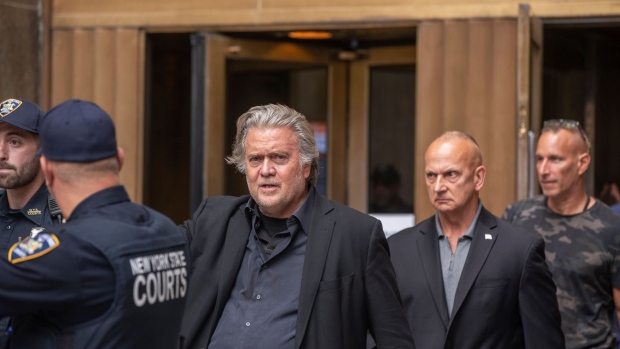 (Bloomberg) -- Former Trump White House strategist Steve Bannon was given a November 2023 trial date on charges he defrauded contributors to a privately funded US-Mexico border wall out of more than $15 million.

Bannon has pleaded not guilty to money-laundering, fraud and conspiracy charges in the case and is free while awaiting trial. The judge overseeing the case set the date in a hearing Tuesday in state court in Manhattan, rejecting a proposed timetable by Bannon that would have resulted in a 2024 trial.

The charges relate to We Build the Wall, a group Bannon helped found that used private funds to construct about five miles (eight kilometers) of border fencing in two locations in Texas and New Mexico. Bannon pledged that all donations would go to constructions costs but actually transferred money to accounts he controlled, according to Manhattan District Attorney Alvin Bragg.

Bannon previously faced a similar case brought in August 2020 by federal prosecutors, but he was pardoned by Donald Trump on his last day as president. Because presidential pardons apply only to federal crimes, Bannon is not immune to Bragg’s state prosecution.

Bannon Defiant After Pleading Not Guilty to N.Y. Fraud Charges

Three other men were also charged with fraud by federal prosecutors but didn’t receive pardons. Two pleaded guilty and one went to trial, which resulted in a hung jury in June.

One of the two men who pleaded guilty in the federal case, group founder Brian Kolfage, admitted taking hundreds of thousands of dollars in funds raised by the effort.