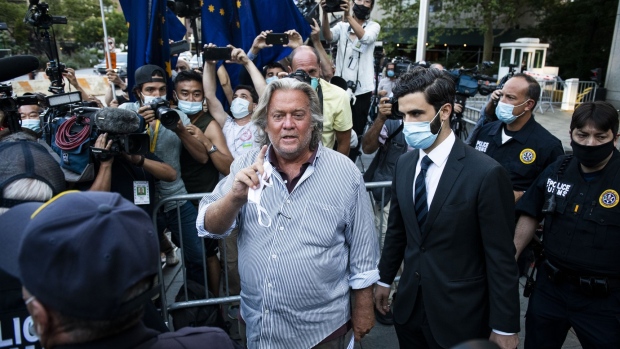 (Bloomberg) -- Steve Bannon, a some-time adviser to former President Donald Trump, was held in criminal contempt of Congress for defying subpoenas from a panel investigating the Jan. 6 riot at the U.S. Capitol, a move that puts the Justice Department in the middle of a politically charged legal battle.

The 229 to 202 vote comes as other former officials agree to cooperate with a House panel investigating the riot, despite Trump’s assertions that executive privilege prevents them from testifying or providing documents.

“Mr. Bannon stands alone in his defiance, and we will not stand for it,” Mississippi Democrat Bennie Thompson, the chair of the investigatory panel, said Thursday. “We will not allow anyone to derail our work, because our work is too important: helping ensure that the future of American democracy is strong and secure.”

Speaker Nancy Pelosi will now refer the matter to the U.S. attorney for the District of Columbia, who along with Attorney General Merrick Garland will decide whether to prosecute Bannon. Potential punishments includes a fine or even imprisonment.

The Justice Department has been reluctant in recent years to prosecute current or former officials who’ve been targeted by House contempt actions. But congressional investigators say Bannon’s testimony is crucial to getting needed details about Trump’s activities on Jan. 6, when a mob of his supporters stormed the Capitol, and his efforts to overturn the 2020 election.

“While the attack was under way, President Trump knew what was happening,” Wyoming Representative Liz Cheney, the vice chair and one of only two Republicans on the panel, said Thursday. “Indeed, he may have been watching it all unfold on television. And yet he took no immediate action to stop it.”

Garland has given little hint of what the Justice Department will do. During Thursday testimony before the House Judiciary Committee, he said only that it will follow “the facts and law” in handling the contempt referral on Bannon.

The law states the U.S. attorney has a “duty” to bring the matter before a grand jury. But the executive branch also has historically held that it has discretion on whether to actually pursue any criminal charge referred by the House; how much Garland and his lieutenants will draw from previous Office of Legal Counsel opinions is unclear.

The mostly party-line vote was not a surprise.

House GOP leader Kevin McCarthy earlier Thursday called the Bannon subpoena as “invalid,” and he and other party leaders urged Republican members to vote against the resolution.

McCarthy embraced Bannon’s argument that he isn’t actively defying the Jan. 6 panel subpoena. Rather, his attorney Robert Costello has argued that Bannon wants the courts to clarify whether executive privilege is at issue here.

The committee has countered that Trump hasn’t yet made a formal assertion of privilege -- and that Bannon wouldn’t qualify in any event because he wasn’t a government employee or a Trump adviser during the period under investigation.

Other key Trump allies blasted the panel for pursuing the contempt motion. Representative Jim Banks of Indiana said Democrats want to make Bannon a “boogie man” and are “abusing their power to put him in jail.”

Ohio Republican Representative Jim Jordan warned that Democrats are “coming after” Trump. “We know what this is really about. It’s about trying to get at President Trump,” Jordan said.

Cheney left no doubt the panel was aiming its sights squarely at Trump.

“This appears to be a supreme dereliction of duty by President Trump,” she said. “And we are evaluating whether our criminal laws should be enhanced to apply more consequences to this type of behavior.”

Pelosi, speaking to reporters before the contempt vote, rebuked Republicans for trying to thwart the investigation of the riot, which resulted in injuries to more than a dozen police officers and charges brought against more than 600 people.

“You would think if they took an oath to protect and defend the constitution, they would vote for the system of checks and balances,” she said.