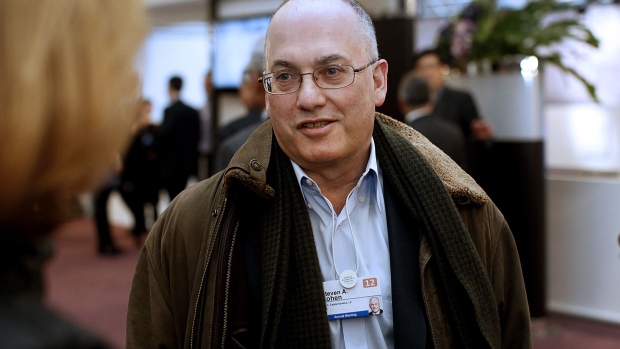 Steven \"Steve\" Cohen, chairman and chief executive officer of SAC Captial Advisors LP, speaks to the media at the Congress Center during day two of the World Economic Forum (WEF) in Davos, Switzerland, on Thursday, Jan. 26, 2012. The 42nd annual meeting of the World Economic Forum will be attended by about 2,600 political, business and financial leaders at the five-day conference. , Photographer: Simon Dawson/Bloomberg

(Bloomberg) -- A 24-hour trading venue’s embrace of cryptocurrencies helped it secure $14 million in a funding round led by billionaire Steve Cohen’s Point72 Ventures.

The funds will help 24 Exchange’s trading platform continue to expand in asset classes including crypto and equities, the company said Wednesday in a statement. The goal is to bring trading to institutional and retail investors around the clock, according to founder and Chief Executive Officer Dmitri Galinov.

“There is no waiting on our system,” he said in an interview. “You see the stock or crypto price, you want to buy or sell, do it now.”

Crypto is a focal point for 24 Exchange and a core reason Point72 provided the capital, according to Galinov. He said the investment was also driven by his relationship with Cohen, dating back to when Galinov worked at Credit Suisse Group AG.

Founded in 2018 and launched in January this year, 24 Exchange reached an average daily volume of $300 million in certain foreign-exchange contracts, according to an earlier statement. The exchange began trading crypto in September under a license obtained in Bermuda, where it is based. The company said it is awaiting Securities and Exchange Commission approval to begin trading U.S. equities.

“Anyone who wants to trade crypto 24/7 would also like to trade Apple or Microsoft 24/7,” Galinov said. “We will give them that option.”

Serving institutional clients 24 hours a day, every day, is 24 Exchange’s goal. A rival, Blue Ocean Technologies LLC, has also announced extended trading hours. A typical U.S. trading day starts with the premarket at 4 a.m. in New York, followed by normal market hours from 9:30 a.m. to 4 p.m., and the after-market lasts until 8 p.m.

Galinov said he expects the exchange to begin serving retail investors next year. The company plans to give investors access to the digital assets without actually holding the coins.

“Banks are having difficulty right now having direct exposure to crypto mostly because of compliance reasons,” he said.