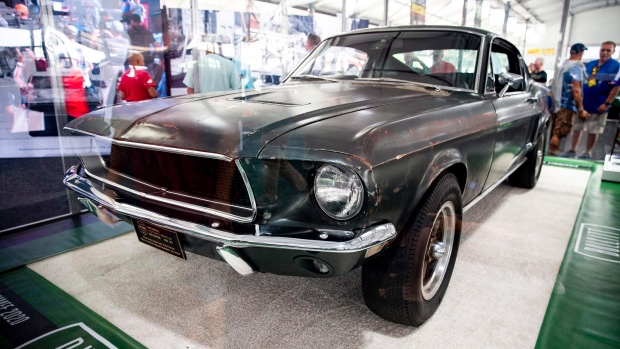 The Bullitt Mustang has sold for US$3.4 million at a Mecum Auction in Kissimmee, Fla. (With buyers fees included, the total price of the sale jumped to US$3.74 million.) The hammer price was the most money ever spent on a Mustang at public auction, beating the previous record of US$2.2 million for the 1967 Shelby GT500 Super Snake set at Mecum’s Kissimmee auction in 2019.

Wearing a large black cowboy hat and standing on the auction podium in front of a standing-room-only crowd, Mecum auctioneer Matt Moravec started the bidding on the Highland Green fastback at US$3,500, but the price jumped to US$1 million almost instantly and then jumped to US$2 million within a minute.

The unusually low starting price for such a well-known car was requested by the car’s owner, Sean Kiernan, who told the auction room before the bidding started that both times the car had sold previously, it was purchased for US$3,500. (Robert Kiernan, Sean’s late father, purchased the car for US$3,500, as did a previous owner, Frank Marranca.) Kiernan said after the sale that he was happy with the final price of the car—and the excitement in the room made for a “once in a lifetime” event.

The auction was not your typical sale in an additional way: The unrestored Mustang was offered at no reserve. Typically cars of million-dollar caliber are offered with a minimum amount required to sell—or, if no buyers meet that amount, owners can retain their ownership. But Kiernan said he wanted to ensure that the car would sell the first time around, since he couldn’t face the prospect of repeating the heavy emotions of selling—or not selling—his late father’s prized possession. “I don’t want to do this twice,” he told Bloomberg in December.

The car is famous as the hero of one of Hollywood’s most celebrated chase scenes, in which Steve McQueen raced it through the streets of San Francisco in the 1968 thriller Bullitt. The interior includes remnants of filming equipment still on the body of the car. A coupe with a blacked-out grille and paint worn to a rough patina, its engine was modified to enhance speed and sound with additional camera mounts welded to the metal tubes underneath its body. Film hands cut into the trunk to allow cords to run from the generator to the cameras and lights.

After filming was completed, a Warner Bros. employee used the car as a daily driver. Marranca, a New Jersey detective, bought it in 1970. In 1974, he placed an ad in Road & Track magazine, as detailed here, that read, “1968 ‘Bullett’ [sic] MUSTANG driven by McQueen in the movie …Can be documented. Best offer.” Kiernan bought the car that year and kept it until his death in 2014, when his son became the owner.

There’s also documentation that shows how McQueen attempted to buy the car over the years since the movie’s debut. Mecum worked hard to make the Bullitt Mustang the star of its annual televised auction, building a special website devoted to promoting it and organizing a multilocation whistle-stop tour concurrent with the car’s 50th anniversary. The auction was stopped mid-sale to show a short promotional video of the car before it rolled through a mob of spectators with Kiernan behind the wheel.

The Bullitt car is one of many McQueen machines to draw a big price with the help of his celebrity star dust. McQueen-associated vehicles have a history of fetching more than market rate: In 2014, a McQueen-owned 1967 Ferrari 275 GTB by Scaglietti sold for US$10.175 million. In 2015, his 1976 Porsche 930 Turbo sold for US$1.95 million—an astounding figure, considering that Porsche Turbos from that era usually sell for closer to US$200,000.

“Bullitt” is also now the most expensive American muscle car sold at public auction, though the record for most expensive American car ever auctioned—a 1935 Duesenberg SSJ that sold for US$22 million in 2018 by Gooding and Co.—remains unscathed. “The Bullitt Mustang has it all: a great chase scene, the McQueen connection, and a fantastic backstory,” said McKeel Hagerty, chief executive officer of Hagerty. “The fact that it had disappeared for decades, only to reemerge as an unrestored, movie-car time capsule is something we’ll likely never see again in our lifetimes.”

At the time of the sale, it was unclear who had purchased the vehicle; a representative for Mecum could not be reached before publication of this story. As for Sean Kiernan, he already has designs on a new project.