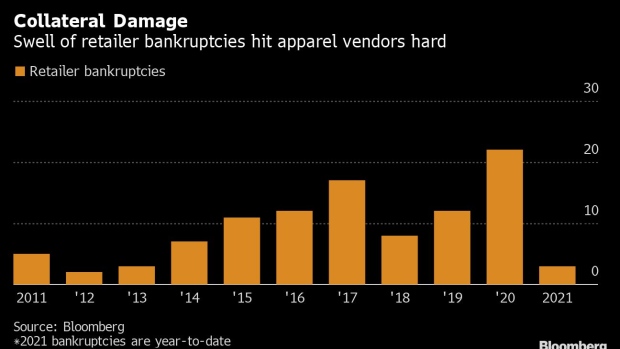 (Bloomberg) -- As U.S. retailers celebrate a boom lifting one of the pandemic’s hardest-hit sectors, scars left by a year of bankruptcies and delayed vendor payments could threaten to undermine their recovery -- just as the crucial back-to-school shopping season begins.

After watching their receivables mount last year, vendors of apparel and other goods demanded change. In order to ship, many began requiring payment upon delivery of the goods or even in advance, according to people with knowledge of the demands, which were made of distressed and healthy clients alike. For merchants, that’s a big cash drain at a time of great uncertainty.

The shift comes after retailers spent much of last year delaying payments to preserve cash. Such maneuvers have long been used by struggling chains, but amid the pandemic, even more stable merchants like Macy’s Inc. and Gap Inc. followed suit. An analysis of company financial data showed such buyers took at least two weeks longer to pay their suppliers than the same period the prior year.

Vendors are “shell-shocked” after a string of Covid-era bankruptcies left them with large losses, and more concerned about guaranteeing they’ll be paid, said Perry Mandarino, head of restructuring and investment banking at B. Riley. “Late payments are not being tolerated,” Mandarino said.

Contributing to their hard-line approach is the knowledge that one traditional safety net has become less available and more expensive. Credit insurance and factoring companies -- the financial support systems for many suppliers -- scaled back last year after suffering their own Covid losses from unpaid vendor bills they were forced to cover. Many are waiting to see how retailers recover and are only selectively writing policies tied to the healthiest merchants now.

Manufacturers need to protect themselves, but they still need to sell goods. Vendors don’t have the capability to manage the risk on their own, said Michael McGrail, chief operating officer at Tiger Capital Group, which conducts services including inventory appraisals. Without a backstop, “it becomes a real leap of faith,” to supply goods and wait for payment.

Some see the pullback inviting nontraditional entrants into the market for vendor financing. New York-based Angelo Gordon is one investment firm wading into the space; it’s begun offering put options on accounts receivable claims, another form of trade credit insurance for vendors.

One other bright spot for retailers is that many have the benefit of red-hot debt markets to refinance other obligations. In March, Nordstrom Inc. issued bonds to buy back pricey debt it borrowed in mid-2020. Kohl’s Corp. followed soon after, slashing its interest costs.

“On one hand, smart companies like Nordstrom and Kohl’s are raising money to maximize liquidity, reduce interest expense, and extend looming debt maturities,” Whitmore said. “On the other, even though many retailers are flush with cash, they are still facing vendor pressures and supply chain challenges more than they have before.”

Vendors have also been taking action to recoup payment when clients delay checks or enter Chapter 11, which freezes ordinary payments and leaves creditors at risk of losses. After stationery chain Paper Source Inc. filed for bankruptcy in March, suppliers complained publicly that the company had placed large orders in the previous weeks only to seek bankruptcy protection without paying for them.

Vendors to Sycamore-backed Belk Inc. last year consulted lawyers about missed or months-delayed payments, and at least a dozen suppliers to Eddie Lampert’s Sears chain filed lawsuits in 2020 over unpaid bills, according to court filings.

Belk filed for bankruptcy in February with a plan to fully repay vendors, and Sears has confidentially settled the majority of its vendor suits. Both companies declined to comment. A representative for Paper Source said the company is “confident” many suppliers will be reimbursed for a majority of their claims. ​

Suppliers to distressed retailers have always had to fret whether their last check before a bankruptcy would leave them short. But amid the pandemic, the concern extended to healthier chains. Merchants across the credit spectrum have strategically deferred rent and other bills to preserve cash, and that’s meant that even healthy buyers with previously sterling records have startled vendors.

Gap, for example, took about 68 days to pay in the quarter through October, more than three weeks longer than in the same period the previous year. It stretched fourth-quarter payments by more than two weeks, to 57 days. Ross Stores Inc. had a similar jump, taking 75 and 68 days to pay in its most recent third and fourth quarters, or about a month longer than last year.

Typically, retailers pay within 45 days, though many doubled that time during the pandemic, according to a person familiar with the situation. At Macy’s, payment times jumped about a month, to 111 and 93 days in the third and fourth quarters.

A Macy’s representative referred to a March 2020 statement saying the retailer would extend payment times to boost liquidity, and added that the department store chain is starting to shorten its payment schedule as operations normalize. Representatives for Ross and Gap didn’t respond to requests for comment.

“There has been and there continues to be a significant amount of disruption in the marketplace,” said Michael Stanley, managing director and head of factoring at leading industry firm Rosenthal & Rosenthal.