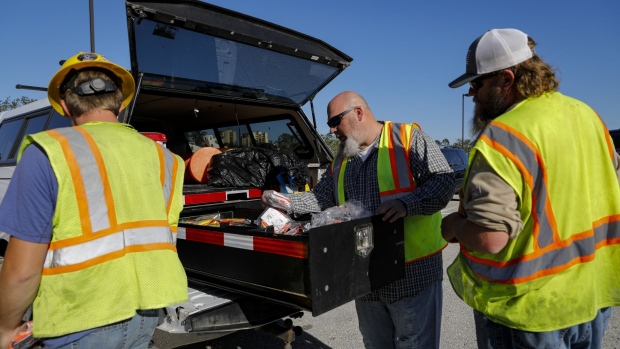 (Bloomberg) -- For five days, Roger Taylor’s crews have worked day and night to get the power back on in Florida communities hardest hit by Hurricane Ian.

They’re part of an army of more than 42,000 who’ve descended on southwest Florida since Ian left 2.6 million homes and businesses without power in one of the worst hurricanes to ever hit the US. Repair workers from 30 states began hitting the ground as Ian neared early last week, part of a national mutual-assistance network that helps utilities repair damage caused by massive storms.

“I’ve never seen anything like this one,” Taylor said as he watched four men replace a snapped power pole in the sweltering midday heat, digging a deep hole in the putrid mud near a 10-foot-high pile of jagged sheet metal and splintered wood. “This storm just kept coming and coming.”

The workers have made remarkable progress in less than a week, fixing one twisted pole and snapped power line at a time. There were still almost 305,000 homes and businesses without power Wednesday morning, down from a high of about 2.6 million in the storm’s immediate aftermath, according to PowerOutage.us.

Ian struck Fort Myers with winds of 150 miles (241 kilometers) per hour and a devastating storm surge. As of Tuesday, there were 72 confirmed storm-related deaths, a number that is expected to grow.

FPL estimated that crews had restored service to 90% of its customers Tuesday, and would have power on for almost everyone by late Friday. Two other area utilities promised most power would be restored by Monday.

One key reason workers have been able to restore power to more than 2 million homes and businesses in a matter of days is that NextEra and other large utilities in the state spent about $3 billion on storm protection in 2020 and 2021, including replacing many wooden poles with concrete ones and placing some power lines underground. As a result, Florida Power & Light’s network of high-voltage transmission lines was largely unscathed, despite Ian’s winds.

The devastation in coastal areas that took a direct hit from Ian shows that there’s so much left to do.

In Fort Myers Beach, Ian blew apart block after block of homes, leaving nothing but jagged stilts in the sand alongside snapped poles and downed lines entangled in heaps of rubble. In one neighborhood, a pink cottage crumpled, toppling a power pole. Up the road, high waters pushed a mass of steel fencing, shattered beams and jagged steel roofing into a cluster of transformers, destroying them.

Across the bay in Cape Coral, Ian destroyed 650 power poles. About 38% of customers, or 181,000 homes and businesses, were still without power Wednesday morning in Lee County, which bore the brunt of the storm. Lee County Electric Cooperative couldn’t estimate how long it would to get power back in hard-hit communities like Fort Myers Beach, and Captiva and Sanibel islands. Some areas could take a month.

Taylor, a Marine Corps veteran from Silas, Alabama, and his crew of 33 men left for Florida as soon as forecasts agreed that Ian would hit. They headed to the northwestern Panhandle, then Tampa, and finally Fort Myers as forecasts shifted.

They rode out the storm in Miami and then got to work, toiling as much as 20 hours a day since Ian churned its way northeast. They slept in their trucks in a Home Depot parking lot before the utilities set up trailers with bunks in a staging area in Bonita Springs, 20 miles south of Fort Myers.

They prioritized their targets.

“The first thing we did was get the children’s hospital lit up,” Taylor said. Since then,  his crew has followed daily work orders from an FPL representative, who they call a “bird dog.” The bird dog has sent them to jobs in Naples, Bonita Springs and Fort Myers.

He knows their work is critical for Ian’s most desperate victims.

Margie Titus’s small home in the mainland, across from Fort Myers Beach, has been in the dark since a storm surge brought five feet of diesel-tainted seawater and mud into her home. There’s no trace of power lines or poles anywhere, all washed away by Ian.

“I don’t know when I will get power,” said Titus, 68. “That means no light, no phone, nothing. That just makes everything so much harder.”

Taylor, pausing from work, had his doubts about meeting the utilities’ goals of getting most power back on as soon as Friday. His crews have replaced a dozen broken poles some days, outfitting them with new transformers and power lines. His company sent 475 workers to Florida, all under contract with FPL.

“This is a massive job,” he said. “The destruction is just so great.”

“In some places it’s not about repairing; it’s about rebuilding,” FPL Chief Executive Officer Eric Silagy said Tuesday at a briefing in Lee County Civic Center. “When you have to rebuild, it takes longer.”

On Monday afternoon, Taylor watched linemen replace two poles that had snapped like twigs, cutting power to a string of warehouses a few miles from the Gulf Coast. Workers had to dig the seven-foot holes by hand because nearby gas lines made it too risky to use heavy machinery, making it slow-going. Three more poles lay on the ground just around a bend.

“I’ve just never seen this kind of damage,” he said. “It’s going to take a long, long time to come back from this.”