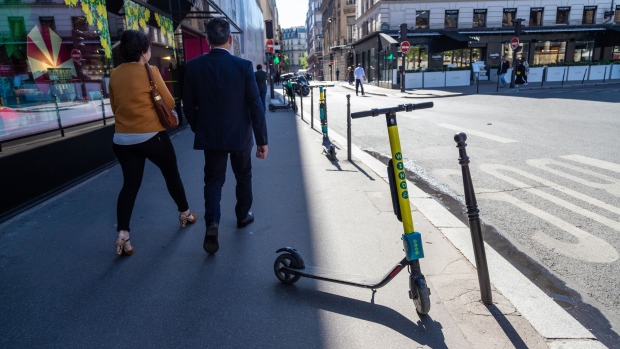 (Bloomberg) -- On a rainy July Sunday in Brussels, two men prepared to fill a rented van with stolen e-scooters. They didn’t notice the Wind employees hiding around the city, ready to catch them in the act.

In the e-scooter industry, theft of the two-wheelers is regular and costly, with replacements cost a few hundred dollars each.

“From our knowledge of Paris, about 10% of all e-scooters are stolen each month,” said Matt Turzo, chief operating officer for Berlin-based operator Wind. “We estimate that’s about 1,500 thefts per month in the city.”

Turzo and regional managers in Brussels concluded that they needed to be more hands-on in curtailing this.

At about 8 a.m. on July 28 in Belgium’s capital city, Wind’s scooters were being dropped off in their usual starting positions having been stored and recharged overnight. Some were placed near the Porte de Namur metro station just a short walk south of the Royal Palace, and more near the store- and cafe-lined Avenue Louise.

Both sites were routine stops on a drive-by route for thieves, who would snatch up these older models -- manufactured by Segway-Ninebot -- in trucks, strip away identifying materials such as GPS positioning sensors, then sell them or their valuable components. It wasn’t uncommon to see 20 or more vehicles vanish overnight in cities like Brussels or Paris, Turzo said, costing thousands of dollars in hardware and more in lost customer rides.

This time, Wind employees had been given cameras and were hidden in alleyways, parked cars, and bus stops, across the street from known hotspots for thieves, according to interviews with Wind workers, video footage, and phone messages seen by Bloomberg.

Wind reported stolen scooters to police three times over the previous few days, but say they were told officers needed more evidence -- ideally a photograph of a truck’s license plate -- in order to take further action.

At 8:08 a.m. on Avenue Louise, a Mercedes-Benz Sprinter pulled up beside eight Wind scooters that had been deposited just minutes earlier. One by one, the two-wheel electric vehicles were loaded into the back.

A Wind employee sent a WhatsApp message to colleagues hidden elsewhere in the city.

Down the narrow street of abandoned concrete office blocks and graffiti-emblazoned loading bays, the van drivers made a mistake. They began to remove GPS components from their haul before driving away.

Ordinarily, Turzo said, the removal would occur as the getaway driver had his or her foot firmly on the gas, speeding out of the city.

“We’d actually be able to plot their journeys on a map until the GPS was cut off,” Turzo said. “In one instance we found one of the comms units thrown into a farmer’s corn field.”

But not this time. The delay gave Wind’s concealed employee time to call the police rather than just capture a photo of the truck’s license plate.

At about 8:22 a.m., half a dozen officers arrived near Rue de Stassart. After knocking on the vehicle’s door, the van drivers were escorted onto the street, where they were placed in handcuffs. One person tried to escape arrest by claiming, falsely, to be a Wind employee, according to an actual Wind employee who was present at the time.

At 8:31 a.m., the rest of the WhatsApp group was alerted: “We got them,” an employee, standing near the police, wrote to colleagues.

About 15 scooters were recoverable from the back of the truck, along with a stack of Wind’s disconnected GPS units, according to a video seen by Bloomberg. Prosecution proceedings are now underway.

Wind’s sting operation was not an isolated attempt to curb wholesale theft. Earlier in July, it began hiding secondary GPS trackers inside a small number of “dummy” scooters in cities where high rates of vehicles were being lost.

The German company also isn’t alone in having resorted to covertly photographing organized theft and vandalism in order to provide police with evidence. Lime, one of the world’s biggest e-scooter rental companies, has done so in a number of U.S. cities, according to a person familiar with the practice who didn’t want to be named.

More broadly, e-scooter startups worldwide are moving away from using modified off-the-shelf versions of consumer models, typically manufactured by Segway-Ninebot or Xiaomi, instead favoring built-for-purpose units that can withstand tough terrain and careless riders. Wind’s new heavy-duty models, for instance, use metal frames rather than plastic, and feature custom electronics that make them far harder to hack, and more difficult to resell.

Turzo said that based on Wind’s observations of theft of these new vehicles, the 1,500 e-scooters he estimated are stolen each month in Paris “would drop to about 150.”

“That’s how good we think our new hardware can be,” he said.

Martin Lefrancq, Smart Mobility coordinator for Brussels, said the rapid growth of the micro-mobility industry over the past year meant the city’s regional authority was having to quickly learn lessons from projects such as Wind’s, and adapt to support it.

This includes the creation of a new taskforce comprising police forces, city officials, and private companies, which will begin meeting regularly from October to jointly discuss “solutions that would help every stakeholder” with regards to issues like vandalism and theft.

“Informing local authorities of the situation is already crucial, but clear solutions are not yet defined,” Lefrancq said.

Turzo said Wind intended for its new, heavy, custom-built models to be more naturally thief-proof, and reduce the need for employees to be in the streets on guard duty.

“We don’t plan on making careers out of sting operations,” he said. “We want the solution to be built into the hardware.”

Why E-Scooters Are on the Rise, Along With Injuries: QuickTake

To contact the editors responsible for this story: Giles Turner at gturner35@bloomberg.net, Amy Thomson