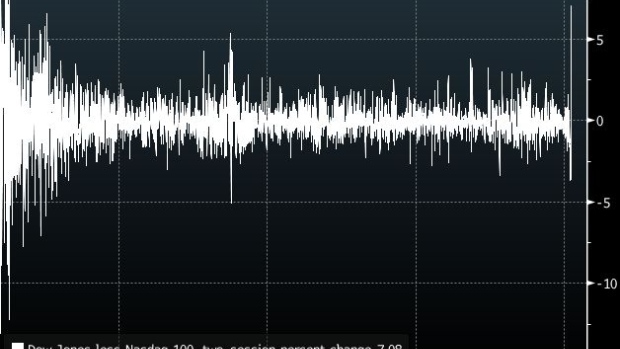 (Bloomberg) -- Major U.S. equity indexes have come unhinged from each other. The Dow Jones Industrial Average, whose membership and archaic weighing system caused it to beat practically everything into a bear market, now is trouncing all comers amid its fastest run in nine decades.

Made up of only 30 blue-chip giants and weighted by share price, rather than market-capitalization, the Dow is getting an outsize boost from companies previously pressured by the coronavirus -- Boeing Inc. in particular.

“The companies that make up the Dow tend to be slow growers. When the Dow was on the decline, they were hit the fastest,” said David Yepez, portfolio manager at Exencial Wealth Advisors. “So now we’re seeing them catching up on the upside.”

Boeing shares have soared as much as 65% over the past two sessions amid the prospect of imminent congressional aid for the beleaguered plane manufacturer. The jet-maker makes up more than 5% of the Dow, compared to less than 0.5% of the S&P 500. The company isn’t even included in the Nasdaq 100.

So far this week, the surge in Boeing shares has accounted for a fifth of the Dow’s advance, data compiled by Bloomberg show. UnitedHealth Group Inc. and The Home Depot Inc.’s performances have each driven another 10% of the Dow’s gain.

United Health and Home Depot are the second and third largest weightings in the price-weighted Dow, respectively. Neither appear in the Nasdaq 100.

The divergence also reflects the role of tech stocks as a haven during the rout -- the Dow fell faster and now is rising faster. Thanks in part to internet giants like Amazon.com Inc. and Netflix Inc., whose shares are higher this year and aren’t in the Dow, the blue-chip gauge is trailing the S&P 500 by 2 percentage points year-to-date and the Nasdaq by 12 percentage points. Versus the tech-heavy gauge, the Dow is still on track for its worst quarter in eight years.

When beaten-down stocks start to outperform, like Boeing, it’s an encouraging sign, according to Julian Emanuel, chief equity and derivatives strategist at BTIG LLC. His anecdotal experience is that the return of foreign inflows into American equities typically has started with the economic bellwethers that make up the Dow.

“From major, major volatility bottoms (and we think this is a bottoming process not THE bottom), the laggards tend to outperform,” Emanuel said.