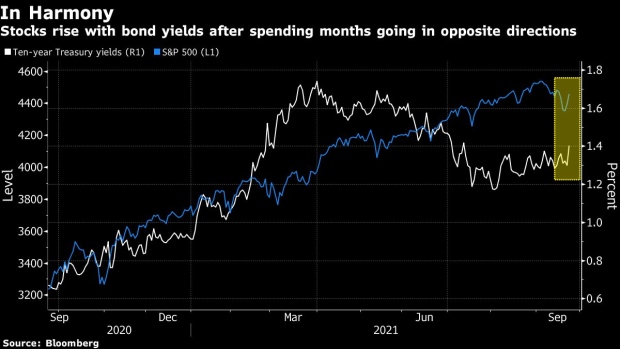 (Bloomberg) -- An enduring mystery of 2021 markets showed signs of unwinding Thursday, with divergent signals on economic growth in stocks and bonds beginning to harmonize.

The S&P 500 climbed 1.2%, ending the longest drought of big up days in 20 months. Economically sensitive shares like energy and banks led the advance. Meanwhile, 10-year Treasury yields jumped the most since February to a two-month high.

While it’s just one day, the concerted moves were something new after many months when 10-year yields clung to the floor -- a sign of economic dread -- while the S&P 500 marched to record after record.

While it may seem strange that Jerome Powell’s strongest pledge yet to start lifting stimulus would be the occasion for such an alignment, it could make sense in a context where investors’ biggest concern is a resurgent coronavirus. The Federal Reserve chair’s taper talk featured heavy doses of economic optimism with a view that growth next year may be strong enough to warrant higher rates.

“You got a very nice layer of reassurance coming from Powell -- we’re on track,” Mike Bailey, director of research at FBB Capital Partners, said by phone. “The risk-on community got stressed out and overheated on Monday, but now we are seeing the temperature come down for that part of the market.”

Other assets confirmed the reflation trade Thursday. Oil jumped to the highest in more than two months while haven assets like gold and the U.S. dollar slipped.

Read more: S&P 500 Snubbing Dire View in Bonds Has Earnings on Its Side

Other explanations exist for Thursday’s cross-asset moves. Even with the rally, the S&P 500 has only recovered about half the drop that began at the start of the month. Some pundits saw evidence of a fixed-income “taper tantrum” similar to the one in 2013, when rates roughly doubled to 3% in short order. But a notable rise in real yields suggested that an improving growth outlook was behind the fixed-income swing.

In the first steps toward withdrawing emergency pandemic support for the economy, Powell said Wednesday that the central bank could begin scaling back asset purchases in November and complete the process by mid-2022, after officials revealed a growing inclination to raise interest rates next year.

“He said he doesn’t need a gigantic jobs number to taper in November. He just needs a reasonable jobs report. That’s definitely confidence in the economy,” Zhiwei Ren, portfolio manager at Penn Mutual Asset Management, said by phone. “They think the economy is on good footing.”

That’s soothing for investors who have occasionally been baffled about the market’s economic outlook. Corporate earnings beat estimates at an unprecedented pace, but growth is forecast to slow dramatically next year. Supply chain bottlenecks and a shortage of workers have prompted companies like FedEx Corp. and PPG Industries Inc. to cut forecasts.

Conflicting messages abounded. Take Monday, when the S&P 500 had its worst decline in four months. While Morgan Stanley strategist Mike Wilson urged investors to brace for worse, with the index potentially plunging more than 20% from its peak, his counterpart at JPMorgan, Marko Kolanovic, advised investors to buy the dip.

For now, bulls have the upper hand and the buy-the-dip strategy, again, has worked. After falling almost 5% from peak to through, the S&P 500 quickly bounced back. The index scored its first gain of at least 1% since July, ending a 42-day streak without gains of that size, the longest drought since January 2020.

“Buy on the dips is still operative for stocks right now,” said John Augustine, chief investment officer at Huntington Private Bank. “Usually, on big bond yield move days, it usually upsets the stock market. This time it seems to be accelerating the stock market with money going from bonds to stocks.”